My eight year old son, Oscar, recently decided he just HAD to join an American Football team. So we contacted our local football league and I took him round the fieldhouse to give the deposit cheque and get him kitted out.

When they gave me his helmet, I was gobsmacked by how heavy it was and immediately said, “Wow! Do you see a lot of neck injuries from these things?” Oh no, they assured me, the kids soon get used to them and the neck muscles strengthen. 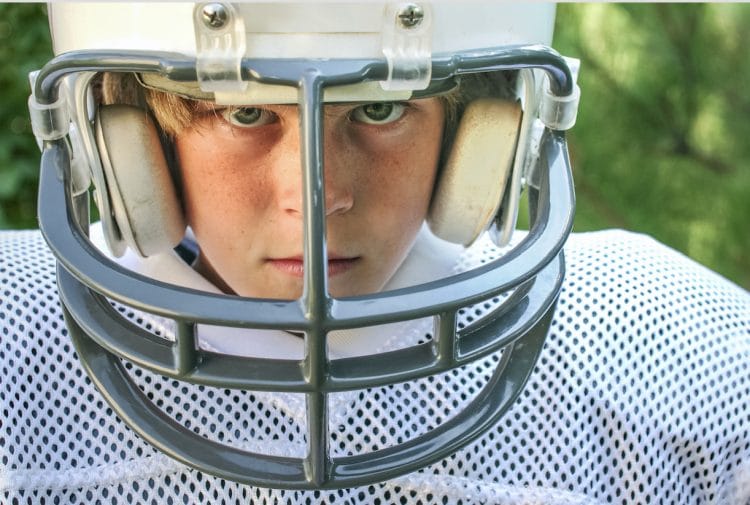 As the day wore on, my uneasiness increased, so I did a wee bit of research on the subject and guess what? My good old gut reaction had steered me right, yet again. So here’s the email I sent to the coach:

Unfortunately, having now seen and felt the weight of the helmet, plus doing a good bit of research on the Internet. I strongly believe wearing a helmet of that weight is not safe for Oscar.

I’m not just concerned about overt damage to the cervical spine, which one can argue is infrequent. I’m more concerned with “undetectable” soft tissue, fascia and visceral damage.

I’m sure if we were to take that helmet to an osteopathic doctor they would have a lot to say about why a helmet of that proportionate weight is not a good idea for a developing child whose plates in their skull have not even closed (they do not close fully until age 20).

A pediatric head and neck injury review showed that in children under age 12, while the head is 90-95% of adult size, the neck is only 75-85% of adult size.*

This further compounds the strain on the neck and shows that for children, their necks are under more proportionate strain and pressure than adults. In addition, the report showed that their neck muscles are weaker to begin with.*

Oscar’s height is 4’2″ and his weight is 65 lbs. I believe the helmet (with face guard) he got weighs close to 7 or 8 lbs. – you’d have to check that though as the scale I have is not reliable. Don’t know how that compares proportionately to adult body weight vs. helmet weight. Would be interesting to check though!

Since the helmet is 10% (or more) of Oscar’s body weight, then the weight of a helmet on a 200 lb football player would have to be 20 lbs for that adult to be carrying a proportionate weight load – keeping in mind that his neck is 25% bigger and MUCH stronger, as well.

I tried to find weights of adult helmets on the Internet, but the only one I could find was an ebay listing for what looked like a fairly old adult helmet and its weight was stated as 5 lbs.

Combined with the fact that the body’s reflex when being charged, hit, etc is to lower the head, I don’t think teaching kids to keep their head up (to minimize risk of cervical spine damage) is going to be foolproof in the heat of the moment. In my experience (as a martial artist) it takes a considerable amount of time and practice to overcome an innate reflex.

I have spoken to Oscar about this and since I teach all my kids to – above all else – listen to their own body, I had him hold the helmet, do some deep breathing and ask his own body whether he felt the helmet was good for his body, or not.

Hence, he too has decided that playing for the Titans is not a good idea for him.

If your child, teenager, etc. plays football or is considering it, this is definitely an issue you want to look at! 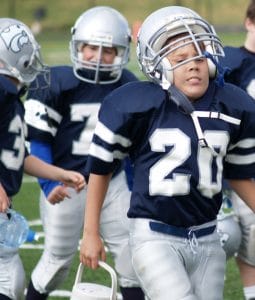 *Dr. Kathleen Klinich presented University of Michigan Transportation Research Institute (UMTRI) data that revealed that the head size of a child grows rapidly between ages 0 and 4 years, after which it