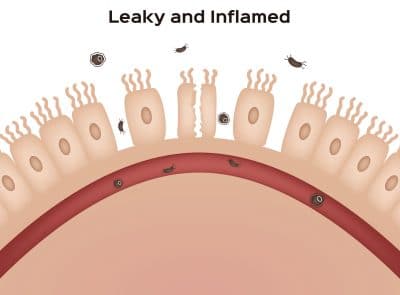 By the time people find their way to my Crohn’s, colitis and diverticulitis treatments, their bacterial flora is usually unbalanced throughout their gastrointestinal tract. The repeated use of antibiotics (often since childhood) and the invasive medical diagnostic tests alone have destroyed much of the “good” (protective) bacteria in their small and large intestines. When the good, protective bacteria are depleted, then disease-causing organisms like yeast (Candida albicans), viruses, parasites, and bad bacteria flourish.

If you get too much ‘bad’ bacteria and Candida yeast in your gut and not enough ‘good’ bacteria, these pathogens will degrade the mucosal lining and even penetrate through the intestinal wall. NSAIDS (non-steroidal anti-inflammatory drugs) and alcohol also degrade the mucosal lining. This causes undigested particles of food to pass directly into the bloodstream, where they are perceived as allergens and trigger an immune response.

This excess of disease-causing microorganisms causes inflammation and damage to the mucosal lining, resulting in IBS, Inflammatory Bowel Disease and leaky gut syndrome. The undigested food particles and bacteria that seep into the bloodstream can also trigger allergic reactions and infection in other places in the body, like the joints, skin, eyes, etc.

The cornerstone treatment for healing the mucosal lining and creating a protective, healthy gut microbiome is to kill the pathogenic microorganisms (yeast, bad bacteria) and re-populate the gut with beneficial bacteria. While you’re doing this, you can simultaneously take supplements and drink organic or pasture-raised bone broth to heal the intestinal tissue and restore the mucosal lining.