In Chapter 4 of Listen To Your Gut, I write about the dangers of Teflon-coated (and other non-stick coated) pots and pans and give you all the data on why we shouldn’t use them.

Well, following is an interesting article from the New York Times, written by someone else who heard about the dangers of Teflon and set out to test a number of different pans to see which one worked best and was the easiest to cook with and clean up afterwards.

I was amused by the fact that she rated the enamel-coated Le Creuset pan as the best out of them all. I have one Le Creuset frying pan (bought while my hubby had a contract in Singapore and was making loads of moola – they’re very expensive) and I have to say I like it the best as well! A full set is definitely on my wish list of things to buy when I have enough money.

Dr. Joseph Mercola recently launched a new line of nano-glaze ceramic pots and pans. However, when I looked up the patent for this new nano-glaze technology, there seemed to me to be a lot of glue involved in getting the nano-sized ceramic particles to adhere to the surface of the pans.   I emailed Mercola asking about the glue and if they had done testing to see if any chemicals from the glue were leaching during the cooking process, but received no response.

My other hesitation with this new nano-glaze cookware is that having spent several months now researching nanotechnology – specifically nanoparticle minerals – I am also concerned about whether the nanoparticle-sized ceramic glaze components leach into food or the air.

You know how we now have washing machines with nanosilver sterilization cycles and socks with nanosilver antibacterial protection? Well, now we’ve also found that the nanoparticle silver in the wash water is entering our ground water and in turn altering the algae and bacterial balance in waterways and ponds, etc.

Joe Mercola states that they tested for any leaching of common metals (like you can get from other pans), but you would have to test specifically for leaching of nanoparticle-sized compounds – which is a very different process.

So whilst those pots (and their light weight) are very appealing, I wish someone would carry out the testing necessary to answer these questions – until we have more data I won’t be trying them.

Anyway, onto the article….

In Search of a Pan That Lets Cooks Forget About Teflon

LIKE many home cooks, I have sent my nonstick skillets to the moldy recesses of my basement, where they have joined the 1950’s aluminum pots and the Dru casseroles (Dutch enamel coated cast iron, now eBay collectibles).

What led to this step were unsettling reports that an overheated Teflon-coated pan may release toxic gases. DuPont, the manufacturer of Teflon, says that its pans are safe and that their surfaces won’t decompose, possibly releasing the gas, until the pan’s temperature reaches 680 degrees. Some scientists say that an empty pan left on a burner set on high reaches 700 degrees in as little as three minutes. All pans with nonstick coatings are subject to the same problems, according to the Environmental Working Group, a nonprofit environmental research and advocacy organization. I banished the skillets last year and spent months dithering over what to buy while making do with the pans I had left: a large Revere Ware skillet with a concave bottom; a small, warped hand-me-down from my mother; and a medium All-Clad in fine shape.

A few passes at online pot sellers made matters worse: there are too many choices. Finally, after consulting the ratings from Consumer Reports and Cook’s Illustrated and calling several experts, I decided to do a test of my own, using the most highly recommended pans, along with a few of my own choices.

While Teflon lets manufacturers make inexpensive pans usable, uncoated cheap pans have hot spots, so cheaper pans – other than cast iron – were never considered. The most important characteristic was how close the pans came to having the nonstick qualities people love about Teflon. Can they sauté and brown, even without oil? Almost as important, how easy are they to clean?

There were eight pans in the test, most of them 12 inches in diameter: All-Clad with an aluminum core, All-Clad with a copper core, Bourgeat copper; De Buyer carbon steel; Calphalon anodized aluminum; seasoned and unseasoned Lodge cast iron and Le Creuset enameled cast iron.

All-Clad was one of the top choices of most experts, but did not do well in my tests because sometimes food stuck to the pans and cleaning them was difficult. Top chefs with whom I spoke agreed. “All of my All-Clad sauté pans have brown spots on the sides and outside, too,” said Scott Conant of L’Impero and Alto. “And eggs always stick.”

That’s the nature of stainless steel, said Harold McGee, author of “On Food and Cooking” (Scribner, 2004) and the scientist who can explain everything that happens in the kitchen. “Things stick to stainless,” he said, “and polymerized oil is one of them.”

For the two sets of tests, I cooked 6 dozen eggs; 24 pounds of chicken breasts with and without skin; 10 pounds of onions; and 10 pounds of potatoes. In one set of tests, pans were coated with one tablespoon of oil; in the other just a thin film of oil was applied with waxed paper. All the pans were preheated, the oil added and allowed to get hot enough to ripple; the food had lost its refrigerator chill.

With a tablespoon of oil, all of the pans cooked well and evenly. The chicken was nicely browned, the potatoes were crisp, the onions were meltingly sweet and the eggs were nicely done. The difference between cooking in All-Clad with copper and with aluminum is not significant enough for most cooks to make the more expensive copper pan worth the higher price. The Bourgeat copper pan, of course, cooked quickly and evenly, too, but the differences are too subtle in most situations to be worth the extra money. 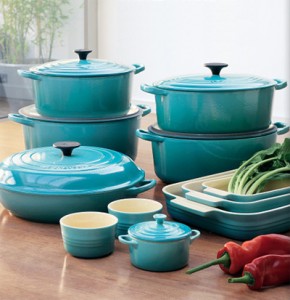 The Le Creuset pan and the two cast-iron pans produced amazing results. Nothing stuck, including the eggs, and it was quite easy to roll up omelets. There were almost no eggs to scrape up. I don’t recommend browning potatoes or onions with a film of oil because they won’t have much flavor, but these pans could do it.   The chicken, on the other hand, was moist and browned beautifully, a result you wouldn’t get with Teflon-coated pans.

Calphalon did not do as well with just a film of oil: the chicken was nicely browned, but an awful lot of scrambled eggs stayed in the pan.  The carbon steel, an old workhorse that wins the prize for ugly duckling, cooked all the foods, with the exception of the eggs, quite well. Like the Calphalon, this pan had a lot of scrambled egg left in it, and one of the sunny-side-up eggs broke when it was being lifted out of the pan.

The only other difference was that the cast-iron pans, with or without enamel, took longer to heat up and cool down. But bigger differences became clear when it was time for cleaning, the kitchen job I like least. The All-Clad, even more so than Bourgeat, required serious scrubbing to remove those pesky little brown spots that form when oil leaps up the sides of the pan and sticks. And food does stick to All-Clad sometimes, requiring removal by cleanser and elbow grease.

The carbon steel and the untreated cast iron must be seasoned, though the process is simple. They must be dried thoroughly and lightly oiled or they will rust.   Cooking certain acidic foods like tomatoes in cast iron changes the taste and color, but it does add iron to the diet.

After all the tests, there was one pan I fell for: Le Creuset. It is easy to clean, and because of its enamel finish, acidic foods can be cooked without changes to color or taste. The cast iron pans were a very close second.

I recommend Le Creuset pans with a matte black enamel interior, not treated with any Teflon-like substance. (The company makes its black and white interior enamel from the same material, and says the black is fired at a higher temperature and withstands higher cooking temperatures.) David Bouley of Bouley and Danube said he uses Le Creuset in his country house because “it is the most reliable.”

For cooking fish, one of the most delicate of foods, Eric Ripert of Le Bernardin uses cast iron, as does Michel Richard of Citronelle in Washington. “We stopped using Teflon a long time ago,” he said. “The skin started coming off, and I didn’t want to give you a steak with a skin coating.