COLONOSCOPY DANGERS – What You Need To Know

2020 UPDATE: I just found out there is now FINALLY a single-use, disposable, robotic colonoscope available and currently being used in Italy and Switzerland. So of course, I had to rush onto the blog and tell you about it immediately! You can read about it here.

2015 UPDATE: 7 years after I first published this post, Dr. John Bergman put together an awesome video covering many of the same points and research — see video at the bottom of the post to learn more! 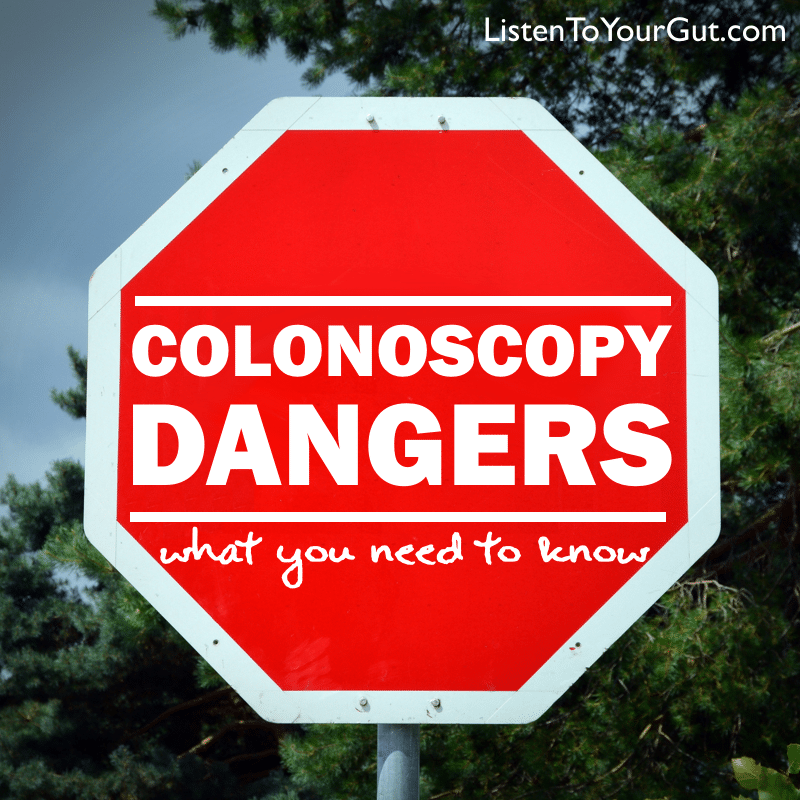 The next time your doctor suggests you have another colonoscopy done, first take the time to really weigh up the risks versus the possible benefits.

Did you know it is impossible to sterilize a colonoscope? Don’t be surprised if even your doctor doesn’t know this. I’ve provided a download link for this full report (below) that you can print out and take in to your doctor – with all the research (from peer-reviewed medical publications) outlined.

So, let’s get started. First of all, this report is going to outline only the most prevalent risks that are present with every colonoscopy. I’m not going to get into rare risks here, like intestinal perforation, just those that may occur through routine procedures.

Regarding possible benefits, the first question you should ask yourself and your doctor is: Will the results of this colonoscopy change the course of treatment? Certainly, there are serious occasions where the best course of action is to have the colonoscopy. But, if your doctor is primarily recommending a colonoscopy as an information-gathering procedure, or as liability protection, then it’s not going to benefit you too much. It may, however, cause a lot of damage and that’s what this report is going to help you assess.

Here’s how a colonoscopy procedure works: First, you have to self-administer a ‘bowel preparation’ procedure. This consists of substances that cause you to completely clear out your bowel and leave the walls of your colon squeaky clean so the fiber optic camera can get a good picture of what’s happening with your mucosal lining and intestinal wall. Understandably, causing a complete clear out of everything from your bowels (usually over a one to three day period) is not pleasant, usually toxic and sometimes painful and traumatic.

But the really damaging thing about this kind of a colon cleansing is that it pretty much destroys your bacterial flora and balance of microorganisms in your colon. The average colon contains 3 – 4 pounds of bacteria. If you’re healthy, most of that consists of good, healthy bacteria. So the colonoscopy prep procedure has just stripped your colon of its good, protective bacteria. And guess what? Your colon is now wide open to secondary, or opportunistic infection by pathogenic bacteria, yeast, viruses, parasites, etc.

Into this now highly vulnerable colon, the doctor then inserts a colonoscope. This is a long tube that closely resembles a garden hose with a fiber optic camera on the end of it. But here’s what most people (including your own doctor) don’t know about colonoscopes: It’s impossible to properly or completely sterilize them.

It was actually Natasha Trenev (the founder of Natren probiotics) who first alerted me to this whole issue. We were on a TV show together when she told a story of how the Mayo Clinic had sent out letters to all its patients who’d had a colonoscopy – warning them that due to the inability to sterilize the apparatus, the patient might have been exposed to Hepatitis, AIDS, etc. I was aghast. Could this really be true? I began researching mainstream medical and scientific journals for evidence and I’m sure you’ll be as horrified as I was at the results.

But before we get into the technical medical jargon, let’s take a look at this newspaper article from the LA Times, where the reporter covered this exact issue:

UNSTERILE DEVICES PROMPT WARNINGS; Use of dirty endoscopes in colon and throat exams can pass along infections, activists say

The nation’s leading manufacturer of endoscopes has known for a decade that some scopes contain cavities inaccessible to cleaning by hand but has failed to fix the oversight, said David Lewis, a University of Georgia research microbiologist who has conducted research for the federal Environmental Protection Agency on the issue of dirty endoscopes.

There is wide consensus that it is difficult to sterilize the devices, which can cost $28,000 each, without using temperatures so high that the scopes themselves become damaged. The scopes have numerous cavities that are difficult to clean, even by hand, critics say.

Acknowledged Timothy Ulatowski, an FDA official who oversees endoscope compliance: “When these things were designed, cleaning and sterilization was obviously an afterthought.”

Even the government can’t agree on how long is needed to clean the devices. The FDA says endoscopes should be disinfected for 45 minutes to kill tuberculosis bacteria, but the Centers for Disease Control believes the job can be done in 20 minutes, Lewis says.

He and other microbiologists advocate sterile disposable parts for endoscopes as well as the use of a condom-like sheath for each new patient. But they say manufacturers and health-care providers have resisted such solutions because of added costs.

Lewis says Olympus, which provides 70% of endoscopes on the U.S. market, has long been aware of cleaning problems associated with its product. In a patent filed in 1993, he says, the company wrote that at times “satisfactory cleaning cannot be achieved.”

So now you have a colon that’s been stripped of its natural protective microflora, and directly exposed to a colonoscope that may be infected with any number of harmful viruses, bacteria and other pathogenic microorganisms.

I know, this is such a fantastical claim to make, that more evidence is certainly needed. So let’s get a little deeper into this issue and make sure it’s grounded in hard science. Each of the following problems (from evidence gleaned from mainstream medical journals), highlights a different facet of the sterilization problem:

* Endoscopes and colonoscopes are damaged by high temperature sterilization, so technicians have to use other methods to attempt sterilization. I say “attempt” because to date, they have not found an alternate method that can kill every type of pathogen.(1,7)

* A common sterilant for colonoscopes (gluteraldehyde) has actually been proven to cause colitis. If you develop any of the following symptoms within 48 hours of having a colonoscopy, it’s likely the gluteraldehyde residues on the colonoscope are responsible: Cramps and abdominal pain, tenesmus (painful, urgent straining to defecate), rectal bleeding and in some cases, hemorrhaging.(2)

* Gluteraldehyde (the most commonly used disinfectant for colonoscopes) also cannot kill mycobacteria. Mycobacterium (MAP) is the fungal/bacterial hybrid microorganism that has been identified in up to 98% of patients with Crohn’s Disease.(3)

* Ethylene oxide gas sterilization has also been shown to be ineffective for sterilizing flexible endoscopes, like colonoscopes.(4)

* Human error also plays a big role in colonoscope contamination. One study observed staff responsible for cleaning colonoscopy apparatus for two years running – and their conclusion was: If the staff do not clean the colonoscope properly prior to disinfection, then no matter what sterilization procedure is in place, the colonoscope remains highly contaminated; and after two years of observation, they discovered a lot of evidence of human error.(6,7)

In the last section of this report, I have listed the specific medical publications and quoted the texts these assertions come from, so you have the hard science backing up these claims. Your doctor will also need to see this section when you take this report in to him/her.

However, before we get to that, here’s what to do if you’re faced with a colonoscopy, to minimize the potential damage.

WHAT TO DO IF YOU DECIDE TO HAVE A COLONOSCOPY

Those of you who have read my books know my personal opinion on colonoscopies and that I haven’t had another one done since my first, over 20 years ago. However, in the event that you really do need to have one done, what can you do to protect yourself?

A medical supply company called Stryker was working on a colonoscopy apparatus with a disposable sheath – called ColonoSleeve – and this would have been ideal. Unfortunately, in 2008 they abandoned the project for unknown reasons. I don’t currently know of any other disposable colonoscopy product, but check with your doctor as one may be developed at any time. If you’re just having a sigmoidoscopy done, make sure your doctor uses a disposable sigmoidoscope. These are commonly available, so should be easily obtained.

However, while using a disposable scope will greatly protect against infection, it still doesn’t make up for the disruption and destruction of your healthy bowel flora. So following your colonoscopy, you will also need to go on high dose, therapeutic-quality probiotic supplementation.

Ideally, you want to first follow the colonoscopy with Jini’s Probiotic Retention Enema and then at least 3 months of high dose oral probiotic supplementation. You may also want to follow Jini’s Wild Oregano Oil Protocol as well to get rid of any new pathogens transmitted via the colonoscope…

p.s. At 25 pages, this What You Need To Know About Colonoscopy report was too long to put in this blog post in its entirety, so just click the link above (you may need to right-click on it) and you can read the whole report and even save a copy to your computer, print it out, or share it with friends.

As you can see from this description, the test prep for a sigmoidoscopy is almost as thorough as that for a colonoscopy (and if you decide to go ahead it is better to use the magnesium and senna test prep rather than the polyethylene glycol), and it is still quite an aggressive cleanse/clear out, so you will need to do Jini’s Probiotic Retention Enema in the same way as advised in the Colonoscopy Dangers report and then continue on high dose oral probiotics for at least 6 months. And also take George’s aloe vera juice before the procedure to help prevent inflammation from the sigmoidoscopy. If you have (or recently had) a tendency to diarrhea, the test prep bowel clearance will also likely exacerbate this – for how long, who knows?

As long as your doctor uses a disposable sigmoidoscope, you will not run the infective risks of the colonoscopy.

So, it has to be your choice, balancing up the pros and cons between your body’s Healing Journey vs. your fears, or if you feel like you should have it done (listen to your gut!), or if your doctor indeed has a good reason to recommend it, or if he is just trying to be compliant with his medical association and avoid malpractice litigation.

At the end of the day, vote with your wallet! Tell your doctor that you will be happy to pay for a colonoscopy when they have a disposable colonoscope, or a disposable sheath that covers the entire colonoscope available – over to him!

NOTE: 7 years after I first published this post, Dr. John Bergman put together an awesome video covering many of the same points and research:

Glad this info is spreading!