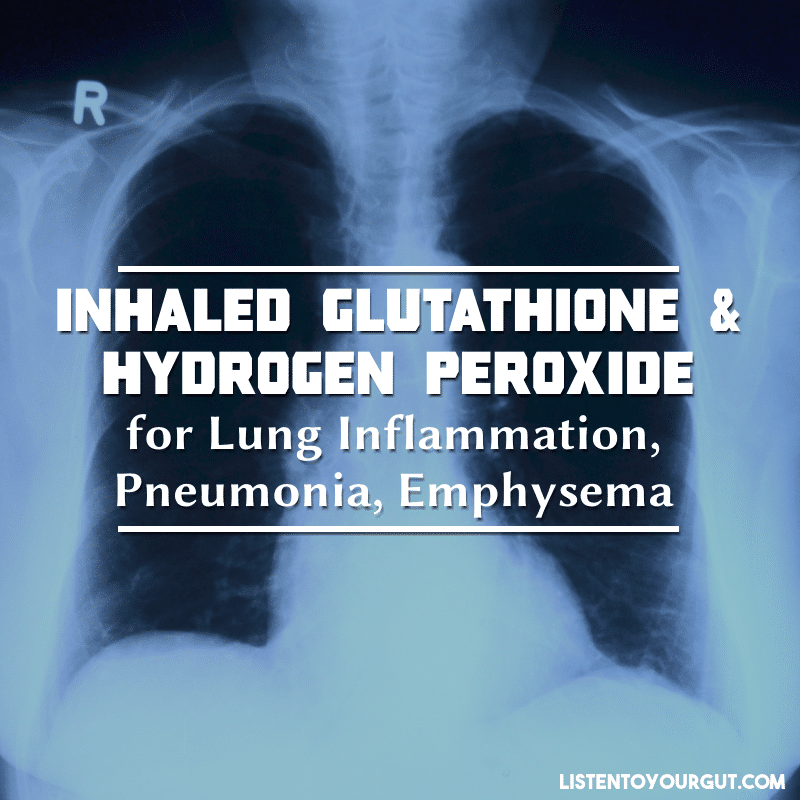 You may have heard about glutathione’s beneficial effect on the immune system, but did you know that you can inhale it directly into your lungs and receive it’s beneficial healing action? Likewise, you can use food-grade hydrogen peroxide to directly affect healing of lung issues from viral flu bugs, to pneumonia, COPD and asthma. Personally, I have used both substances in a nebulizer and had positive experiences with each of them. Let’s start with glutathione…

Inhaled Glutathione via a Nebulizer

I used it myself following a bout of severe pneumonia, where it hurt to take a deep breath or inflate my left lung fully. I felt a marked difference after the first session, but after a while, it wore off. However, as the treatments continued, the expansion in my lungs remained for longer and longer periods. You will also get the overall boost to your immune system by inhaling it through your lungs as well.

At one point, I had a bout of the flu and having had pneumonia, I didn’t want to take any chances. So I went to my naturopath for intravenous vitamin C, B complex and magnesium, along with 20 minutes of inhaled glutathione. My cough was gone the next day.

A few years later, my son had a cough that just wasn’t clearing up. By that time I had purchased my own nebulizer, so I went to my Naturopath and bought a vial of glutathione (needs to be kept refrigerated) with a syringe to measure the dosage for the nebulizer. Again, after a week of daily treatments, my son’s lungs were clear.

Note: Please take the time to read through the many comments posted below as we have nurses and others who know WAY more about this than me, contributing their valuable information.

Here are some good articles giving some solid scientific research behind this effective natural therapy: 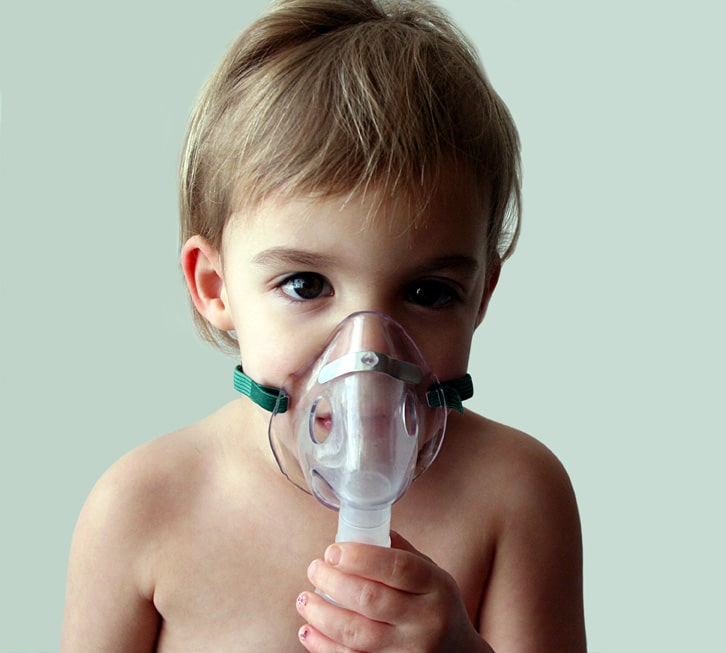 You can see lots more articles by entering this search term into your browser: inhaled glutathione for lung inflammation

Liquid glutathione, suitable for use in a nebulizer, can be quite hard to find as it is usually sold through Naturopathic or Functional Medicine doctors, or some other licensed professional. Wellness Pharmacy has the option to reach out to their team if you’d like to discuss the potential benefits of Glutathione with one of their pharmacists, or if you are looking for a physician in your area that is familiar with the use of glutathione and can prescribe/sell it to you. They are selling liquid glutathione for $60 for 5 ounces (which is much cheaper than I paid in Canada from my ND) but you need a prescription to order it.

Now let’s look at a much cheaper, but perhaps equally beneficial option…

Hydrogen Peroxide & Colloidal Silver in a Vaporizer for Lung Infection

Another therapy that may be worth a try is to put hydrogen peroxide into your vaporizer at night. This is a very easy, inexpensive therapy. I also used intravenous hydrogen peroxide to clear up my pneumonia – but intravenous treatments are expensive and take about 2 hours to administer. So this is a home remedy you can try and see if it improves your situation.

General guidelines are to use 15 ounces of 3% hydrogen peroxide (MUST be food grade hydrogen peroxide) to every one gallon of water in a vaporizer and just let it run all night. But personally, I prefer to just inhale the H2O2 for 10-15 minutes at a time, via a nebulizer (instructions below). You can also turbo-charge this remedy by adding 1-2 tsp of colloidal silver to the gallon of water.

How to Make a 3% H2O2 Food Grade Dilution

You can make a larger amount if you wish by using this formula:
1 part 35% H2O2
11 parts distilled water

Be VERY careful when handling 35% hydrogen peroxide as it will burn your skin instantly on contact. If it’s in a plastic bottle, then direct the opening away from you when you open it, in case it spits some out from the pressure build-up.

This video will show you exactly how to make your 3% hydrogen peroxide dilution from a 35% food grade dilution. Do NOT use common drugstore or grocery store hydrogen peroxide – it MUST say, “FOOD GRADE” or you will be putting all kinds of contaminants into your lungs as well:

Hydrogen Peroxide in a Nebulizer

Once you have your food-grade 3% H2O2 dilution, you can then dilute it further for use in a medical nebulizer. A nebulizer is a machine with a compressor that turns liquid substances into vapor that you can then inhale through a breathing spout or face mask. You can use food grade hydrogen peroxide in a nebulizer 1 – 3 times per day (takes about 10 minutes with a good quality nebulizer), to resolve all kinds of lung issues. There are reams of testimonials on the Internet (EarthClinic, Curezone, etc) from people who’ve used inhaled hydrogen peroxide with fantastic results for viral infections, COPD, emphysema and asthma. You may have heard of the Bill Munro protocol – it is the one most people reference. 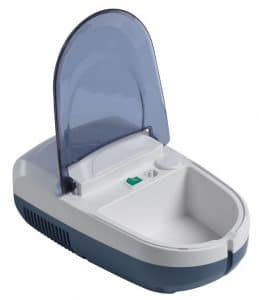 A friend of mine used food grade hydrogen peroxide in a nebulizer for her nine year old son – who has suffered respiratory issues since he contracted RSV (Respiratory Syncytial Virus) as an infant, and it worked so well he would ask for it every night before bed, for about 3 weeks. It dramatically improved the quality of his sleep and he was able to sleep through the night (without waking due to coughing or lack of oxygen).

I have used food grade hydrogen peroxide in a nebulizer – on myself and my kids when needed. I suspect hydrogen peroxide actually works as well as inhaled glutathione – but I would have to get pneumonia again to test it and be sure! However, it is much cheaper than the glutathione, so definitely worth a try. Post below and let me know your results.

Here’s the nebulizer I use. And for a killer cough one winter, I used food grade hydrogen peroxide three times per day and within 2 days was no longer coughing at night (I had not been able to lie down to sleep for 2 weeks!). I started with nebulizing the hydrogen peroxide once per day, but that did not have much effect. As soon as I ramped up to 3x/day the effect was immediate. I used a 0.54% concentration – so 20 drops of 3% H2O2 in 5 ml of distilled water (see the chart below).

Here’s an interesting story from a woman who used 3% hydrogen peroxide in her nebulizer to heal her asthma. Personally, I would use a a much weaker dilution (max 1%) and accomplish the same effect over time, but of course, listen to your own body wisdom!

Dr. Sircus also has a great article here on nebulizing a number of different substances – including magnesium.

If you suffer mostly from asthma and bronchial spasm, then you definitely should add an EASILY ABSORBED form of magnesium to your daily regimen. There are two really effective forms of magnesium that do not affect the bowels – so if you’ve avoided magnesium due to it’s laxative effect, you no longer have to! My friend, Dr. Carolyn Dean MD, ND wrote in her book The Magnesium Miracle, the following six reasons why magnesium is important in the treatment of asthma:

1. Research shows that many patients with asthma and other bronchial diseases have low magnesium.

2. Both histamine production and bronchial spasms increase with magnesium deficiency.

3. Many drugs used in the treatment of asthma cause a loss of magnesium, only making symptoms worse.

4. Magnesium is an environmental detoxifier reducing the triggers for asthma.

5. Magnesium relieves stress to alleviate the emotional triggers for asthma.

If you tend towards constipation and would like a little help with your bowel movements, you can take magnesium citrate, 300 mg per day. But if you want to bypass the digestive system (or take a larger dose), then take your magnesium in nanoparticle (angstrom-sized) form, or topically as transdermal magnesium oil – this oil can either be applied directly to your skin, or added to your bath or footbath. For complete details and instructions, see my blog post all about easily absorbed forms of magnesium.

Since our soils have become depleted of minerals, it is estimated that up to 60% of the population is deficient in magnesium, so likely ALL people would benefit from adding this essential mineral to their daily intake. I even give magnesium daily to my kids and it prevents them from getting cramps or ‘growing pains’ as they’re both competitive athletes (aged 9 and 11).

Here’s a story from one of Dr. Dean’s clients who even used magnesium to cure her dog’s asthma!

“The dog owner said that she’d read that asthma is caused by a magnesium deficiency. Since her dog has asthma attacks she decided to start spraying magnesium oil on the dog’s belly and it worked. It prevented attacks and it also stopped an attack if she applied it as soon as one occurred. She said the best way to apply the magnesium is to spray it on your hand or a cotton ball and rub it on the dog’s skin keeping it from running into the private parts. The magnesium is salty and oily so it can be irritating and if that’s the case, it would need to be diluted with water.”

So personally, I would use BOTH a substance (like glutathione, or hydrogen peroxide) in my nebulizer AND supplement aggressively with atom-sized (nano) magnesium.