My Experience of an Elemental Diet for Crohn’s Remission 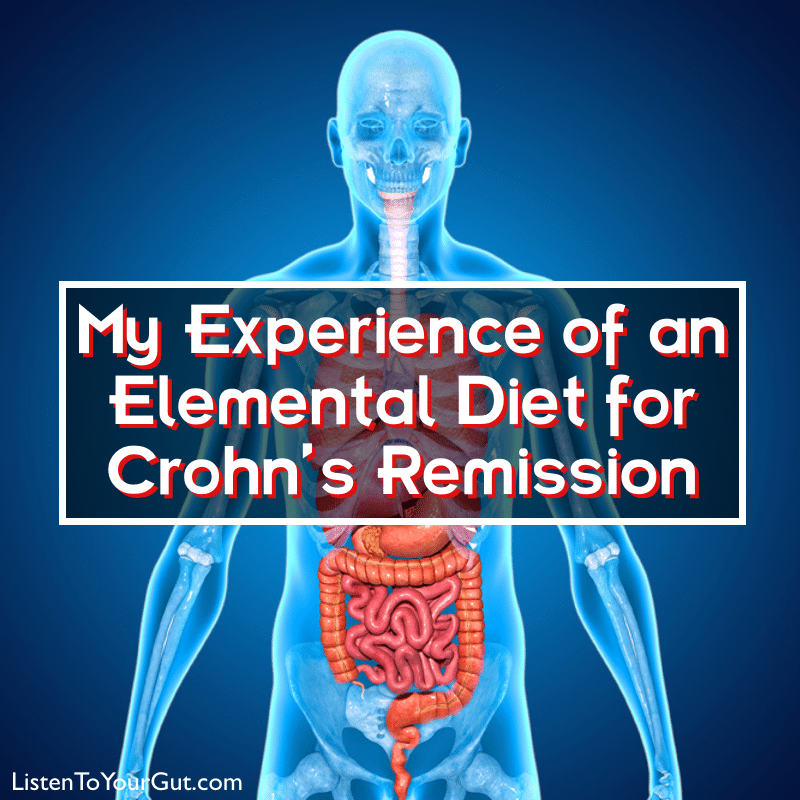 When your digestive tract is inflamed or ulcerated, it becomes very difficult for your body to digest food, or to absorb any nutrients from your food. Your diet can become so restricted that you can only tolerate five to ten foods. In extreme states, you cannot eat any normal foods at all.

I have gone on an elemental (pre-digested, liquid) diet twice in my life. The first time was due to intestinal haemorrhaging that left me at 99 lbs (I’m 5’7″) and required a transfusion of four pints of blood. I had two objectives; stop the bleeding and gain weight. Continuing to eat regular food simply re-opened the wounds and started the bleeding again. Therefore, my nutrition needed to come from a completely pre-digested (elemental) liquid source, which my Gastroenterologist told me resulted in disease remission as often as Prednisone (steroids).

I sampled each of the elemental (pre-digested) products provided by the hospital, but found the taste and ingredient list unacceptable. All of the products contained artificial flavors and sweeteners, large amounts of sugar (in relation to maltodextrin) and high levels of oil – which resulted in painful intestinal spasming. Rather than drinking these, or, undergoing a surgical procedure to have a tube inserted in my stomach and the commercial elemental products pumped in, I set out to find a natural, healthy alternative.

After an extensive search of health stores and the Internet, I devised my own elemental formula by mixing together six different products. I did this 8-9 times a day to give my body the nutrients it needed in elemental (pre-digested for maximum absorption) form. Because all the food I ate (or more accurately, drank) was pre-digested, the elemental diet also gave my bowel a complete rest, which allowed my wounds time and space to heal.

In addition, I added numerous supplements to each shake to further facilitate my healing and recovery. Using this formula, I gained 36 pounds of solid weight (not fat) in six weeks and my albumin (blood protein) levels were restored to normal. I went from being so weak I could barely move around my apartment, to cycling and lifting weights at the gym at a solid weight of 135 lbs. One month later I got pregnant, had an excellent pregnancy and gave birth to a healthy baby boy named Oscar. 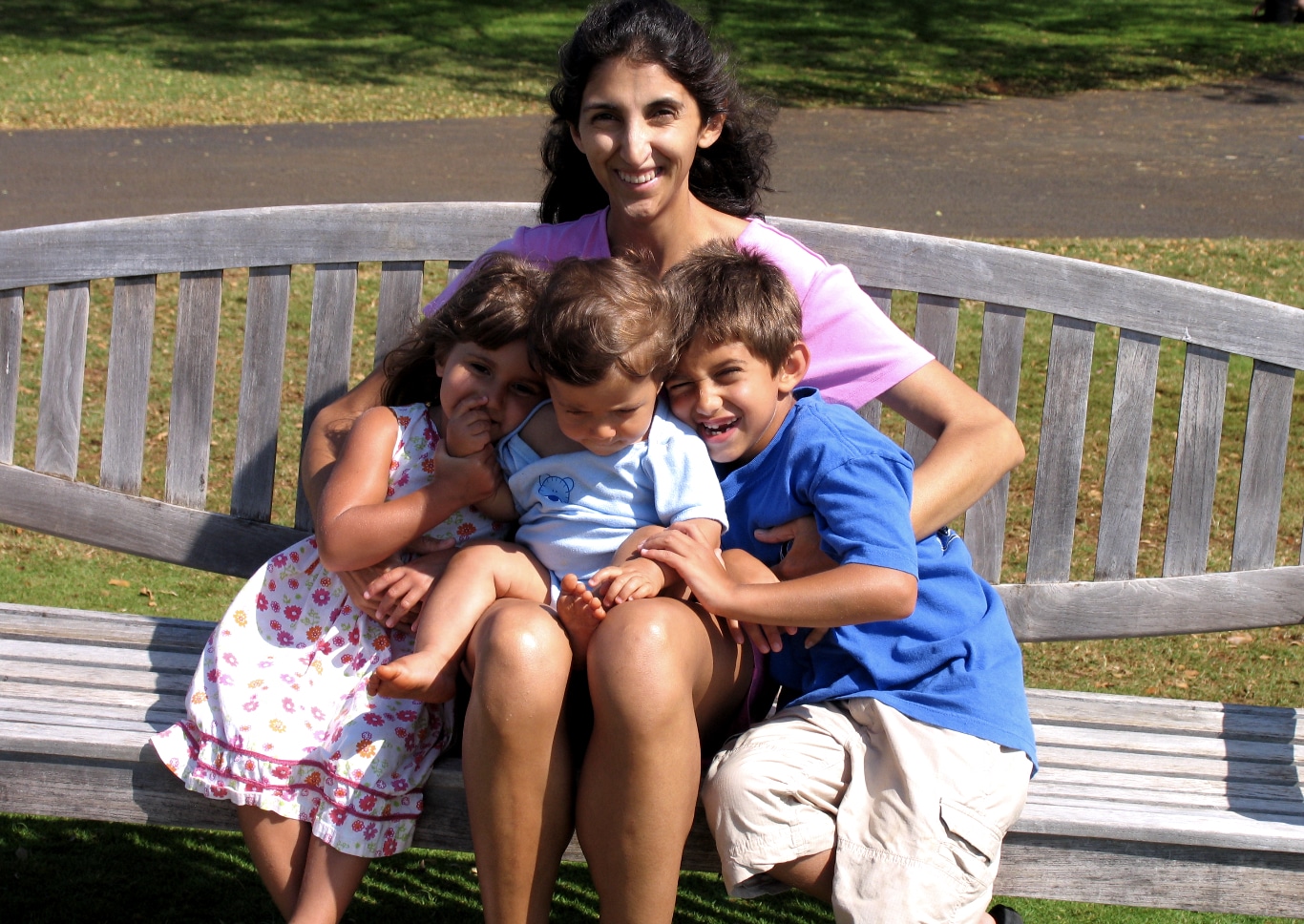 As with most illness, it was a confluence of events and stressors that led to my second time on an elemental diet. Until I weaned him from night nursing at 18 months, Oscar did not sleep more than three hours in a row, so neither did I. We also went to Singapore when Oscar was eight weeks old, for six months. However, when we came back to Vancouver, the new condo we had bought was far behind its construction schedule. So we then spent the next five and a half months travelling around England, Hawaii and Arizona, living out of suitcases. In addition, Oscar has a voracious appetite (and high metabolism) so he breastfed full feeds about ten times a day. Combined together, the stress of transatlantic flights, no home, no routines for the baby, all the varied adjustments involved for new parents, and the severe extended sleep deprivation eventually became too much for me.

I gradually lost weight until I was 115 lbs and then I took a new calcium/magnesium supplement I’d bought that also contained something called Betaine HCL (Hydrochloride). About eight hours later, my colon started bleeding. After wracking my brain to try and figure out what could have triggered the bleeding, I finally remembered the mystery ingredient and looked it up in one of my encyclopaedias. There I discovered that Betaine is something that stimulates the production of stomach acid. It should never be used by someone with ulcers and even people with normal digestive systems should start at a very low dose and stop if they experience any discomfort. Obviously, in a digestive system as sensitive as mine, that’s all it took to trigger the bleeding and as I was so run down I knew the situation could deteriorate quite quickly. 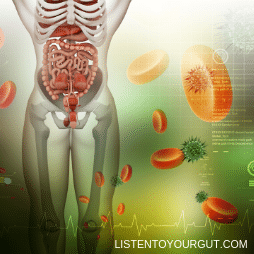 I’ve found that you can use all kinds of herbal supplements to prop yourself up and keep going, but when your body becomes too run down and malnourished, it loses the ability to heal itself. So even though you give it the tools, your body has no energy or resources left to utilize those tools. Although the bleeding wasn’t anywhere near the haemorrhaging I experienced prior to the first time I went on this IBD Remission Diet, I didn’t want to risk it escalating to that point, so I went on an elemental diet after three days of passing blood, ranging from about 3 tbsp. – 1/4 cup per bowel movement, with small blood clots the second and third day.

The good news is that I was also nowhere near as ill and run down as I had been the first time round, so although my bleeding had completely stopped by the end of day four, I remained on the diet exclusively for two weeks. I then continued drinking a few shakes a day for an additional ten days as I gradually re-introduced normal food (known as a half-elemental diet). I also didn’t feel the need to gain weight as quickly as I did the first time, so I only consumed six shakes per day.

At the end of two weeks I’d gained seven pounds and by the time I was fully back on regular food, I’d gained a total of 14 pounds. When I feel I need it, I have a shake in the morning as it’s a great nutritional boost and an excellent way to take all my supplements in an easily digestible form. During my first pregnancy, I’d had a shake every morning with all the supplements and flax oil added as it’s a wonderful way to ensure excellent health for both yourself and the baby.

However, a word of caution to women: the IBD Remission Diet is such a great rejuvenator of health that your fertility will also become very healthy and robust, so be very careful if you don’t want to get pregnant! I got pregnant again, with my second child (my daughter Zara on the left side of the picture above), two months after my second time on the IBD Remission Diet – in spite of using birth control!

Here’s an in-depth teleseminar on how best to use an elemental liquid diet to heal gastrointestinal disease, along with details of who should not go on an elemental diet!