The Health Benefits of Broths 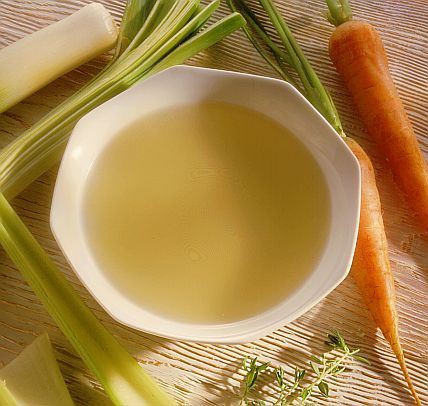 Many of you who have my book, The IBD Remission Diet will know that I strongly advocate that people drink meat and vegetable broths in between the Absorb Plus shakes on the Diet. This is largely due to the amazing health benefits of homemade bone broths. But it also serves to stimulate the appetite: If you just consume sweet tastes all the time, you’ll hit satiety quite quickly and just not be able to face the thought of yet another shake!

However, if you alternate sweet and salty tastes, this keeps the appetite stimulated and makes it much easier to consume the number of calories you need each day from the Absorb Plus elemental diet shakes.

For those of you who have purchased the new Listen To Your Gut program, one of your Complimentary Bonuses included a Healing Diets Recipe Book, and in that recipe book, I give you all the recipes for making homemade broths. You can then use these broths when you make soups, stews, or gravies/sauces. Again, I did this partly for the taste benefits, but primarily for the health benefits.

Are Homemade Broths Worth the Time & Hassle?

Traditional cultures all over the world – from Jewish to Asian – have always used homemade broths as an integral part of their diet. Sally Fallon and Mary Enig have written a fantastic cookbook based on traditional/primitive food preparation techniques, called Nourishing Traditions. If you’re to the point in your healing journey where you’re on the Minimize Gas & Bloating Diet or Maintenance Diet, then I highly recommend you pick up this cookbook and begin eating this way for optimum health. If your system has not yet healed to the point where you can move on from the Reduce Diarrhea Diet, then it’s too early for you to use the Nourishing Traditions cookbook. Until your system is healed more, you won’t be able to benefit from it. However, whatever stage of healing you’re at, you can most certainly benefit tremendously from homemade broths.

As Sally Fallon writes in her article Broth is Beautiful:

“Thus, broth is a vital element in Asian cuisines–from the soothing long-simmered beef broth in Korean soups to the foxy fish broth with which the Japanese begin their day. Genuine Chinese food cannot exist without the stockpot that bubbles perpetually. Bones and scraps are thrown in and mineral-rich stock is removed to moisten stir-frys. Broth-based soups are snack foods from Thailand to Manchuria.

Asian restaurants in the US are likely to take shortcuts and use a powdered base for sweet and sour soup or kung pau chicken but in Japan and China and Korea and Thailand, mom-and-pop businesses make broth in steamy back rooms and sell it as soup in store fronts and on street corners.”

What’s In The Bones?

Now, to be honest, the recipes for broths in “Nourishing Traditions” are actually better than mine – because they call for more bones in the pot, and also get you to add vinegar to draw out the minerals from these bones. I like to use Bragg’s Apple Cider Vinegar (another health product) and you don’t have to worry about the acidity because the vinegar is boiled off in the cooking. As Sally Fallon points out in her “Broth is Beautiful” article:

“Peasant societies still make broth. It is a necessity in cultures that do not use milk because only stock made from bones and dairy products provides calcium in a form that the body can easily assimilate. It is also a necessity when meat is a luxury item, because gelatin in properly made broth helps the body use protein in an efficient way.

The French were the leaders in gelatin research, which continued up to the 1950s. Gelatin was found to be useful in the treatment of a long list of