Is VSL#3 A Good Probiotic Supplement? 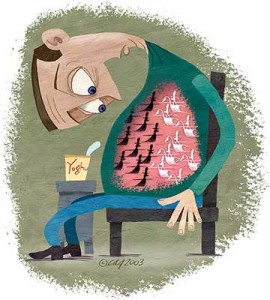 If you read through the probiotic selection criteria given in Chapter Two of Listen To Your Gut, you will see that VSL#3 doesn’t meet all the criteria for a fully bioavailable, therapeutic probiotic of maximum potency (these selection criteria were taken from microbiology research). But yet, this probiotic has shown great results in clinical trials. How can that be?

Something that is not common knowledge is that the trials done using VSL#3 were not done using the commercial product that is sold to customers, but using fresh product, straight out of the lab. I contacted the manufacturers years ago about this, but they refused to comment or send me any further information.

This is not to say that VSL#3 and other probiotics have no therapeutic value, because the final decision to action must be based upon experiential evidence. You can have all the scientific theory in the world proving or disproving any given thing. Whilst we must research and use our intellectual gifts, at the end of the day, you’ve got to do what works!

Often I have had a strong intuition about something and years later scientific evidence has proved me correct. And, as has already been pointed out, different things work for different people. Which is why my book is titled, Listen To YOUR Gut – not someone else’s. And never give your power away to any authority.

One last interesting tidbit to chew on: In Natasha Trenev’s book, Probiotics: Nature’s Internal Healers, she outlines several studies that show that even when bacteria are completely dead, or even absent, they still have a protective effect! One example given is that they put a species of probiotic into the center of a petri dish containing a pathogenic bacteria. The pathogens fled to outer edges of the petri dish, trying to get as far away as possible. Then they dumped out the contents of the petri dish and cleaned it thoroughly. When they added the pathogen again, they still fled to the outer edges of the petri dish. Why? Was there an ‘energetic footprint’ left behind by the probiotic? Or some incredibly minute particle that still remained despite washing the dish? Who knows. But it’s absolutely fascinating and illustrates how even if you consume a probiotic that’s mostly dead, it can still have a positive effect.

So, in the end, do what works. If you get better results from VSL#3, then use that. Again, I must refer to one reader’s story who got the best results from probiotic cycling – he alternated Natren, VSL#3 and Dr. Ohira’s. If he stayed on any one, his symptoms would return, but by cycling through them, he avoided any flares (as soon as symptoms would begin to return, he’d switch brands). All these brands are good ones to experiment with as none contain anything harmful.

Personally, I wish more people would experiment with this (probiotic cycling) as I’d love to hear what happens, and perhaps we can come up with an even more improved protocol.

Oh yes, one last thing. Previously, I did express my reservations about not taking probiotics whilst bleeding. This was not based on any scientific evidence, but merely my own feeling about not doing too many things at once (since when the body is very ill it is often oversensitized and trying to treat everything at once can trigger a flare). However, as I do state in LTYG, there is a colon clinic in Sydney that has used high dose oral Natren probiotics and daily Natren retention enemas to treat bleeding cases of Crohn’s and Colitis with much success, for several years now.

So again, please follow your own gut. As long as you are not supplementing with <a hre