Help for Babies Who Can’t Sleep Through The Night 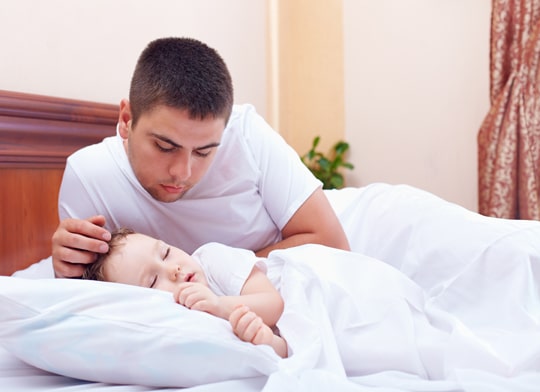 I’ve never met a parent (including myself) who wouldn’t love a “magic formula” to get our kids to sleep through the night – so we could too.

The main technique most mothers around me tend to use is some version of the Ferber Method, also referred to as “controlled crying”. This is the same technique my mother used when I was an infant, to get me to sleep by myself (in my own crib, in my own room) through the night.

I have never even considered using this technique with my 3 kids, just following my gut intuition, and I recently found an excerpt from lactation consultant Pinky McKay that so eloquently outlines why:

One of the arguments for using controlled crying is that it ‘works’, but perhaps the definition of success needs to be examined more closely. In the small number of studies undertaken, while most babies will indeed stop waking when they are left to cry, ‘success’ varies from an extra hour’s sleep each night to little difference between babies who underwent sleep training and those who didn’t, eight weeks later. Some studies found that up to one-third of the babies who underwent controlled crying ‘failed sleep school’. A recent Australian baby magazine survey revealed that lthough 57 per cent of mothers who responded to the survey had tried controlled crying, 27 per cent reported no success, 27 per cent found it worked for one or two nights, and only 8 per cent found that controlled crying worked for longer than a week. To me, this suggests that even if harsher regimes work initially, babies are likely to start waking again as they reach new developmental stages or conversely, they may become more settled and sleep (without any intervention) as they reach appropriate developmental levels.

Controlled crying and other similar regimes may indeed work to produce a self-soothing, solitary sleeping infant. However, the trade-off could be an anxious, clingy or hyper-vigilant child or even worse, a child whose trust is broken. Unfortunately, we can’t measure attributes such as trust and empathy which are the basic skills for forming all relationships. We can’t, for instance, give a child a trust quotient like we can give him an intelligence quotient. One of the saddest emails I have received was from a mother who did controlled crying with her one-year-old toddler.

“After a week of controlled crying he slept, but he stopped talking (he was saying single words). For the past year, he has refused all physical contact from me. If he hurts himself, he goes to his older brother (a preschooler) for comfort. I feel devastated that I have betrayed my child.”

It is the very principle that makes controlled crying ‘work’ that is of greatest concern: when controlled crying ‘succeeds’ in teaching a baby to fall asleep alone, it is due to a process that neurobiologist Bruce Perry calls the ‘defeat response’. Normally, when humans feel threatened, our bodies flood with stress hormones and we go into ‘fight’ or ‘flight’. However, babies can’t fight and they can’t flee, so they communicate their distress by crying. When infant cries are ignored, this trauma elicits a ‘freeze’ or ‘defeat’ response. Babies eventually abandon their crying as the nervous system shuts down the emotional pain and the striving to reach out.

One explanation for the success of ‘crying it out’ is that when an infant’s defeat response is triggered often enough, the child will become habituated to this. That is, each time the child is left to cry, he ‘switches’ more quickly to this response. This is why babies may cry for say, an hour the first night, twenty minutes the following night and fall asleep almost immediately on the third night (if you are ‘lucky’). They are ‘switching off’ (and sleeping) more quickly, not learning a legitimate skill.

Whether sleep ‘success’ is due to behavioural principles (that is, a lack of ‘rewards’ when baby wakes) or whether the baby is overwhelmed by a stress reaction, the saddest risk of all is that as he tries to communicate in the only way available to him, the baby who is left to cry in order to teach