All I can say is Thank God Dr. Mercola (with his list of over 2 million) is informed and active on this whole WiFi, cellphone, electromagnetic, microwave radiation debacle! His latest article, estimating that deaths from microwave radiation will surpass deaths from cigarette smoking and asbestos combined, features this latest EXCELLENT video from EMR expert, Magda Havas PhD:

I did a teleseminar with Dr. Magda Havas a few months ago to try and get clear on the risks of this technology and what each of us can do to protect ourselves and our children, you can download the mp3 recording here and / or download the pdf transcript here.

Of special note in Mercola’s article is this slide from the European Reflex Report, visually showing DNA breaks in a comet assay test from 24 hours of cell phone radiation exposure compared with DNA breaks from 1600 chest x-rays: 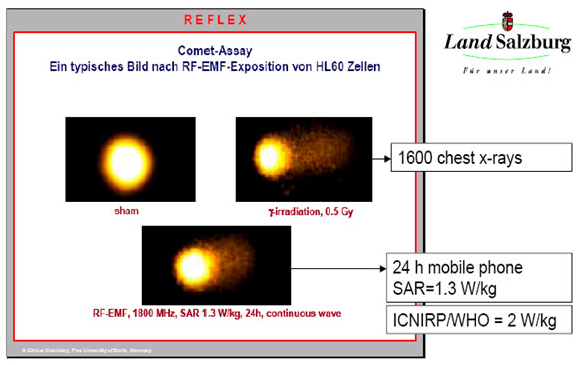 “when the Wishaw T-Mobile phone mast went up in her small U.K. village, an estimated 77 percent of the residents within 500 meters became ill with a range of health problems from symptoms of electrosensitivity to infertility and cancer. Seven years later a cancer cluster was discovered in the village, after which the tower was forcefully removed.

Six ladies developed breast cancer, there was one case of prostate cancer, one case of bladder cancer, one case of lung cancer, three cases of pre-cancerous cervical cells, one man developed a spinal tumor and motor neuron disease (MND), many cases of breast lumps and pervasive symptoms of electrosensitivity, such as sleep problems,headaches, dizzy spells, vertigo, fertility problems, immune disregulation, and fatigue. An Olympic level horse was also treated for blood problems.

When the mast came down, the symptoms of electrosensitivity went away, and with few exceptions, cancers people were treated for never recurred and the Olympic horse no longer suffered with blood problems.”

So what does this mean in terms of my daughter’s current risk? We have already noticed that if she goes to school (6 hours of WiFi radiation in the school + cellphone radiation from teachers and students) and then straight to her gymnastics (3 hours), she will get nosebleeds. And not little ones; massive, gushing nosebleeds.

However, if I keep her home from school for half the day, twice per week, on the days she does her gymnastics training, she does not get nosebleeds. So her body has shown us where her exposure threshold is, that results in visible, noticeable negative symptoms – but what’s going on at the cellular level, that we don’t know about?

How Much Is Too Much?

It’s so hard as a parent and someone who also understands that health is a holistic phenomenon. What I mean by this, is that I can give my kids ALL the physical elements they need to be healthy. But if