Why You Should Avoid Fluoride 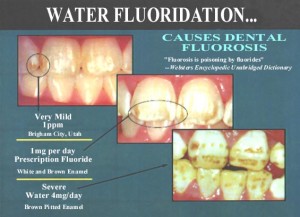 Many of you know that I warn in Listen To Your Gut against using toothpaste that contains fluoride and I recommend you only drink filtered or spring water. Well, although I’ve taken a second look at topical fluoride vs. systemic (ingested) fluoride, here’s some recent research that further backs up my warning against systemic fluoride. And in my opinion, it is particularly vital for people on long-term steroids, or prone to osteoporosis to rigorously avoid any fluoride use or ingestion.

The following is excerpted from: Too Much Fluoride in Water Endangers Bones By Deborah Zabarenko

WASHINGTON (Reuters) – Fluoride in drinking water — long controversial in the United States when it is deliberately added to strengthen teeth — can damage bones and teeth, and federal standards fail to guard against this, the National Academy of Sciences reported on Wednesday.

Children exposed to the government’s current maximum fluoride limit “risk developing severe tooth enamel fluorosis, a condition characterized by discoloration, enamel loss and pitting of the teeth, ” the academy said in a statement.

Earlier reviews of health issues associated with fluoride have considered enamel fluorosis to be ugly but not a health hazard. But the new assessment considers it a health hazard as one function of tooth enamel is to protect the teeth and underlying dental tissue from decay and infection.

Over a lifetime, people who drink water with the level near the federal limit of fluoride probably have a higher risk for bone fractures, a majority of the panel concluded.

The EPA (Environmental Protection Agency) allows up to 4 milligrams of fluoride per liter of drinking water — .000534 ounces per gallon — but the report found this level did not protect against known risks from the chemical.

This next article shows the extreme damage that fluoride can do (as evidenced in an Indian village), but also points out how and why the current “safe fluoride level” used by America is still too high:

Madhya Pradesh is famous for its rich mineral deposits. “The problem is enormous, unbelievable,” says Andezhath Susheela of the Fluorosis Research and Rural Development Foundation in Delhi. She has been unraveling the national story for a decade during which time her estimate of the number of people leading “a painful and crippled life” from fluorosis has risen from one million to 25 million and now to 60 million – six million of them children – spread across tens of thousands of communities. “In some villages three-quarters of the population are seriously affected.”

Many parents, including Krishna’s mother, suffer painful, stiff and misshapen backs and hips, and chronic gastro-enteritis. Bhaskar Raman, a local activist who brought the village’s plight to the attention of doctors, says there has been an epidemic of stillbirths and involuntary abortions – all known symptoms of fluoride poisoning.

In Britain, the Department of Health says the “optimum” fluoride dose for water supplies is 1 part per million. But in one Indian village studied in detail, Bhanakpur near Delhi, water with between 0.7 and 1.6 ppm of fluoride was enough to leave 17 per cent of the population suffering from the bent bones of skeletal fluorosis.

In 1985, when the EPA raised the maximum contaminant level to 4 milligrams of fluoride per liter of water, they used dosage figures miscalculated in 1953 by Harold C. Hodge, who was chairman of the NAS committee on toxicology. Hodge’s original figures (20-80 mg/day for 10-20 years) were corrected by Hodge in 1979, and by NAS in 19