Why Our Family Is Trying Fluoride Toothpaste 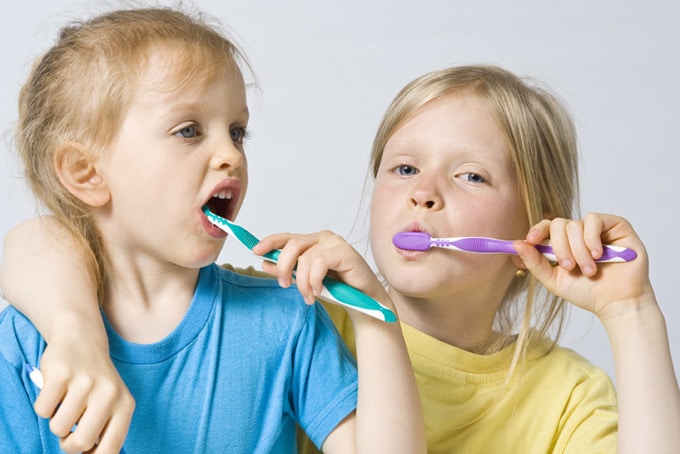 In my continuing quest for cavity-free dental health for my family, I have taken a second look at fluoride. Whilst knowing that fluoride hardens tooth enamel very effectively, we have stayed away from it because of the negative systemic effects (toxicity and fluorosis).

As I took a second, more in-depth look at this mineral though, I came to realize that there is a big difference between ingested fluoride (fluoridated water, fluoride supplements) and topical fluoride (toothpaste, mouthwash, fluoride trays on your teeth at the dentist).

Watching my daughter receive three anesthetic injections prior to her latest dental work, I thought, “Okay, but which is more toxic to her body: fluoride toothpaste topically, or these drugs directly into her bloodstream?”

I’m also wondering about the synergy of using fluoride in toothpaste and then holding the Bone Matrix nano-sized minerals in the mouth immediately afterwards – would this re-mineralize the teeth further and provide even harder enamel?

“A report by Czechoslovakian researchers indicates that fluoride matters little when it comes to preventing tooth decay. A study of 745 children aged 6 to 14 years, from several localities of Czechoslovakia where the drinking water contains calcium and magnesium in large amounts, showed impressively fewer caries in these children than in others throughout the country. This finding was no surprise to other scientists who reported previously that calcium combined with magnesium has a beneficial effect on the resistance of teeth to caries. Interestingly, in all of the localities where tooth decay was below average, the fluoride content of the water was also low.” (Cesk. Stomat., May-June, 1966.)

“Fluoride gets a lot of the credit for preventing tooth decay that should go to magnesium, a University of Colorado dental researcher says. He is Dr. Lewis Barnett, who has been doing research into tooth decay since 1950. Barnett said that magnesium also strengthens teeth and bone. ‘It is just as feasible for communities to add magnesium to their water supplies,’ he said. Given a choice between fluoride and magnesium, Barnett said, he would choose magnesium.” (“Researcher Says Magnesium Aids Dental Health,” St. Louis Post-Dispatch, Aug. 28, 1966)

You’ll notice that these two quotes both referred to fluoride in the drinking water – not topically applied fluoride. As you read through this report, you’ll begin to understand what the difference and significance is between these two methods of usage.

What follows is a sampling of my research into the fluoride issue and what led me to my decision to try topical fluoride next for my family:

And then please tell me your thoughts, questions and own stories in the COMMENTS section below…

Okay, here’s the update a few of you requested: 2.5 years later, we are still using the fluoride toothpaste, the one we use is Natural Dentist Anti-Cavity toothpaste

The kids continue to drink raw milk and swish for 1 minute after brushing their teeth with Bone Matrix – a nano-sized Bone/Tooth Support blend. They also floss most nights with flossing sticks.

In fact, you can see the brands for ALL the products we use (I prefer the PerioBrite mouth wash) in this new section I created on my Shoppe for: Dental Health

My eldest two kids have been cavity-free for 2 years. My youngest got his first fillings (age 8) because once he started school, the sugar train runs non-stop and parents at soccer keep giving him Gatorade (gak!!) which he drinks at least half of before I see him.

I have LOTS more to say on this topic