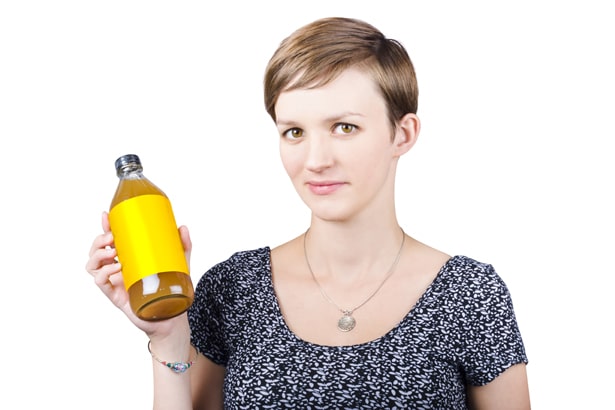 A really great article on apple cider vinegar by Dr. Joseph Mercola is the inspiration for this blog post (and I excerpted a lot of his article here). But I had  to do a bit of searching as many sources cite this first 2004 study – but no one (not even Mercola) gave the dosage! In the original study, the dosage was given in grams (of all things!) which is not really helpful. However, I have done the math for you and worked out that the 20 gram apple cider vinegar (ACV) dose is equivalent to roughly 1 and a half tablespoons.

The other odd thing about the original study is that the test meal they gave participants after the ACV dose was a white bagel, butter, and orange juice! Could you have a more sugar-laden meal for a diabetic?? So the fact that the ACV had such positive results on their glucose levels after such an unhealthy, sugar-heavy meal makes it even more impressive! So here we go…

In 2004, a study cited in the American Diabetes Foundation’s publication Diabetes Care found that taking apple cider vinegar (1.5 tablespoons mixed in 1/4 cup water) before meals significantly increased insulin sensitivity and dramatically reduced the insulin and glucose spikes that occur after meals. The study also added artificial saccharin as a sweetener to the ACV and water, but I would recommend you use natural Stevia instead.

The results were quite significant:

All three groups had better blood glucose readings with the ACV (apple cider vinegar) than with the placebo.

People with pre-diabetic symptoms benefited the most from the ACV, cutting their blood glucose concentrations by nearly half.

People with diabetes improved their blood glucose levels by 25 percent with vinegar.

People with pre-diabetic symptoms had lower blood glucose than the healthy participants after both drank vinegar.

A follow-up study geared at testing vinegar’s long-term effects yielded an unexpected but pleasant side effect: moderate weight loss. In this study, participants taking two tablespoons of vinegar prior to two meals per day lost an average of two pounds over the four-week period, and some lost up to four pounds.

In 2007, another study cited by WebMD involving 11 people with type 2 diabetes found taking two tablespoons of apple cider vinegar before bed lowered glucose levels in the morning by 4 to 6 percent.

How Should Apple Cider Vinegar Be Used?

There are no official guidelines about taking vinegar internally. Some people take one to two teaspoons a day, mixed in a glass of water or juice, before meals or in the morning, and report benefits from doing so. The risk of taking small amounts of apple cider vinegar seems low.

If you are diabetic, then you may want to experiment with taking your ACV before all your meals – maybe your body only needs one dosage per day, or maybe you do best with two or three. Just make sure you take it on an empty stomach and then about 10-15 minutes later, eat your meal.

If you tend towards heartburn, I would be very careful about taking ACV (apple cider vinegar) before bed – that may not work well for you.

And if you have IBD or stomach ulcers, then test a very small amount to begin with (start at 1/4 tsp mixed in 1 cup water) and gradually increase over time and see how your body responds. But be very careful as ACV is acidic! It is composed mainly of acetic acid – which can trigger bleeding if your mucosal lining in your intestines or stomach is already damaged.

I would definitely be sure I was taking my Natren probiotics daily as well (but not at the same time as ACV) as these therapeutic probiotics provide a protective effect along with improving digestion and absorption.

Apple cider vinegar makes a delightful salad dressing. You can even make a vinegar-based coleslaw, rather than the usual creamy mayonnaise-based one. It is good on fish as well and serves as a great tenderizing marinade for meat, giving it a bit of zing. And it’s tasty drizzled over cooked greens.