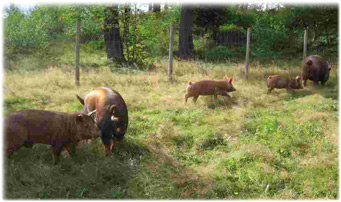 The Pigs at Sumas Mountain Farms

Well I’m feeling very much the pioneering, homesteader today as I finally got up the gumption to attempt rendering lard!

Of course, I would only use fat from a fully pastured, naturally-fed and housed animal. Aside from the humane issues, fat is the storehouse of hormones and toxins. The farm I ordered from not only keeps their pigs outside, but if any supplemental feed is needed, they make sure it does not contain soy (which is truly unique these days) and is certified organic.

Off topic, but here’s another interesting tidbit: Did you know that when chickens are fed soy, the soy protein shows up in their eggs too? That’s why Sumas Mountain Farms (where I ordered from) does not feed their chickens soy either.

Anyway, I ordered the Leaf Fat from around the pig’s kidneys, which is the cleanest, highest grade fat – if you’re using it to make pastries, this is the one you want to get. I actually have NO idea what I’ll be doing with my lard, but I figured I’d start with the cleanest because it will also have the least smell.

Apparently, if you’re rendering a large amount of lard, or using the other types of fat, many people do it outside, or in their garage. If you’ve ever made fish-head broth, you know what I’m talking about!! Many of these traditional foods have a pungent smell during the cooking process.

Since I was only experimenting with a small amount, I just used my crock pot on my kitchen counter. With the range hood fan on low it was just fine.

After searching a number of different recipes/instructions for rendering pork lard, I decided that this one from My Humble Kitchen inspired the most confidence in me and so I followed her instructions.

Everything went exactly as she said, except after scooping out and straining about half the lard, I forgot to keep checking the crock pot, so the second half of my batch overcooked the cracklings to a nice crispy finish. Which was great for the cracklings (just add salt and YUM, down the hatch!) but left that portion of lard with a yellow tinge and a taste of fried pork. My first half, which I did correctly, was snow white odorless lard. Here’s the color difference from the first half of my batch (on the bottom) to the second half (yellowish lard on the top): 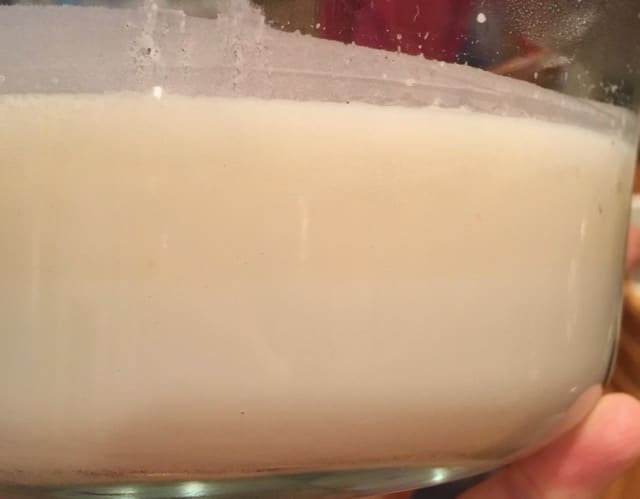 Hey, but that’s the learning curve right? Many people noted that their crock pot couldn’t be set at a low enough heat to avoid crisping/over-cooking the cracklings, so they chose to render their lard on their stovetop in a saucepan, or double-boiler. Although I have to say, if I was doing a larger batch, or using a less clean fat, I would want to do it on a hot plate outside, or a crockpot in my garage – as I’m sure the smell would be an issue. And yes, the smell is yummy at first, but after an hour or two, and realizing that fat-carried odors will cling to everything in your house… you get the picture.

But wait, the cracklings!

An unexpected bonus from this experiment was the pork cracklings! Now I am a person/body type that needs a LOT of good fats. If all I ate was animal fats, cold-pressed oils and veggies, my body would be perfectly happy. So I have had a bacon fetish my whole life, BUT I pretty much only eat the fat. I can’t tell you the ecstasy