The Perfect Place To Live 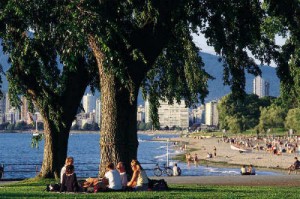 I live in a place that is absolutely fantastic, except for one big problem: the weather. Here in Vancouver, Canada it is rainy, dark and depressing for about eight months of the year. For me, that is a long time without sun and no, I’m not one of those hardy Canadians who gets on all the rain gear and goes hiking and mountain biking in the midst of it anyway.

So, for the last eleven years, I have been trying to find a way to escape Vancouver during the dark, wet winter months.

I started by selling my telecommunications company and setting up a new company that was completely Internet-based. My husband later joined me in this company and then he also started another Internet-based company. So we are both fully mobile. All we need to live and work anywhere in the world is a phone and high-speed Internet connection.

What amazing freedom! people say. You can live anywhere in the world, why do you live here? Yes, why indeed?

We then moved about an hour east of Vancouver, along the coast to a smaller town called White Rock. Ten minutes from the U.S. border (where our warehouse is located), White Rock receives substantially more sun than Vancouver and being further away from the mountains, the pressure from the cloud cover is also not so strong.

Okay, great, now we were down to only about… seven months of rain and darkness per year.

Well shortly after that, I became pregnant and started having babies. Along with that went homebirths, extended breastfeeding, co-sleeping, unprocessed organic meals and all the other fundamentals of raising emotionally and physically healthy children.

Every time we would get ready to leave Canada, I would get pregnant again. So three children and ten years later, our youngest is now two and a half and we are finally in a position to get out of White Rock.

But we have not been idle in the meantime, oh no. We have made one to six month forays to a number of hot places to research and see if we could live there; Kaui, Hawaii, Barbados, Antigua, Turks & Caicos, Singapore, Arizona, Florida, California, Puerto Vallarta, Loreto and Playa del Carmen.

But guess what? Every single one of those places had something wrong with it that was serious enough to be a “deal-breaker”. Either there wasn’t any decent schooling, or no organic food, or rampant pesticide use and pollution, or undeveloped infrastructure (i.e. no decent Internet connection), or too expensive, or overcrowded, or unsafe guns, drugs and politics (hmmm which ‘civilized’ country could I be referring to here?), or any combination of the above.

As I write this, we are visiting Playa del Carmen, on the Mayan Riviera in Mexico (about one hour south of Cancun) for the fifth time. However, the longest we have stayed previously is three weeks and each time we have stayed at an all-inclusive resort. So this time we are staying in a house that we have rented for two months, so we can live like locals. Playa del Carmen came the closest to our requirements out of everywhere we’ve been, so we came down here to give it a trial and see about buying our own house here.