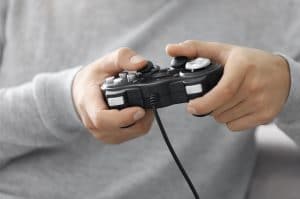 It’s a common stance that parents should limit the number of hours per day, or per week, that their children are allowed to stay sedentary and “zoned out” playing electronic games.

However, after reading this very fascinating blog post written by a teenager himself, I must admit I’m reconsidering the whole issue (the response from the boy’s mother is also a good one):

This second take on it, also brings in another angle I had also not previously considered: Why is it okay (and even encouraged) for children to lose themselves for hours in the fantasy world of a book, but not a video game? Of course, she addresses other important aspects too:

Fortunately, we don’t have a problem with this (yet!)- whether it’s because my kids aren’t teenagers, or because they’re very active, I guess time will tell! – but still, it’s good to be aware of the different viewpoints if the problem ever does arise.

I do think it’s also important to consider the radiation load of computer and especially High Definition TV viewing (HDTV is in the Super High Frequency Range according to NASA’s website – higher even than a cell phone) though.

So make sure kids are at least 2 feet away from any computer and as far away from the TV as you can get them. Also, don’t use wireless components, like a wireless mouse, keyboard or WII device. Again, these carry a similar electromagnetic radiation load to a cell phone.

And if you want to know what’s wrong with cell phones and cordless phones, and why children should never use them, see my other post:

I find with my kids it also helps to tune them into what their bodies are feeling. Asking things like, “How does your head feel?” or “How are your eyes?” after a gaming session. And then sharing common experiences like ‘fuzzy head’, reduced long-range vision, etc. can help tune them in to looking out for the welfare of their physical body as well – not just their mind and emotional needs.