Should I Have A Baby? 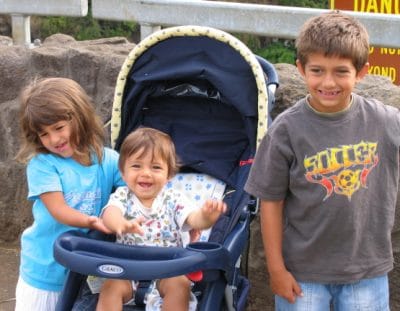 My three monkeys: Zara, Hugo, Oscar, many years ago!

I have a number of friends who have chosen to remain childless. And indeed, this is a growing trend in the Western world.

Recently, I received an email from a friend of mine who has been staunchly committed to not having children her entire adulthood, who is now reconsidering at the age of 45.

Her boyfriend of four years has decided he definitely wants to have a child. So she is now, for the first time, reconsidering whether she should agree to a child, or say goodbye to a good man.

She asked me for my thoughts (as a good friend and mother of three) and here is my reply. For the sake of anonymity, I’m going to call my friend Suzanne and her boyfriend Keith:

I certainly understand Keith’s insistence on children. But let’s be realistic, no one, no matter what age they are, can guarantee fertility. Especially nowadays with infertility skyrocketing. Just look how many twins are around now – a good indicator that fertility was medically assisted.

Look at Ian (my husband) and I – we both wanted kids. But neither of us had fertility-testing. If one of us was infertile, would we have divorced? Hell no. Personally, I think the desire for relationship has to come first and the desire for kids second. I mean, what about adoption?

How much time has Keith actually spent around babies, young children? Has he ever taken care of a baby or toddler on his OWN for 4 hours even?? So many people have a romanticized view of ‘progeny’, but when the reality hits, it’s a very different story. Come over here for a visit, and we’ll leave you guys alone with our kids for 6 hours a day, for a few days. And then Keith can see what the reality is! And NO, it is NOT different when they’re your own! My mum used to say that, and it’s a crock. Of course your love and connection is different, but the physical reality/demands are the same – except worse, because babysitting ends and you get to go home for a good night’s sleep. With parenting, the first stretch of “babysitting” lasts about 3 years, 24/7, until you get a good night’s sleep.

And so, you’re absolutely right to have your concerns about being left with primary responsibility for the child. Because here’s the other reality: YOU will be the primary caregiver during the first year, at least. Because breastfeeding (HUGELY important for child’s ongoing health into adulthood) is something only you can do. You’re going to be the one up at nights and sacrificing endlessly – unless you can pump into bottles and have him do the feedings. But then, realistically, if he’s the one going to work and earning all the money, he can’t be up all night – so it will still have to be you.

Oh……how to even get into all the nitty-gritty……

My brother told me of a study where they polled parents after they’d had kids and something like 74% of them said, that knowing what they know now, they would not have chosen to have children. Of course, they did not wish their current children had never been born! They were speaking hypothetically, an “if you had the chance to do it all over again, would you…” type of scenario.

Now, one thing I can say, is that it’s only really brutal for the first 3 years. Then, there are MANY more blessings and gems than sacrifice and grind.

So I guess a good question to ask yourself is: Am I willing to give up EVERYTHING for 3 years?

And yes, I think you also need to be prepared and willing to be a single mom. Divorce aside, what if Keith dies?

So, if I were to respond from a reality-based viewpoint I would say: Don’t have kids unless you desperately need them. Note I didn’t say “want” or “like”.

However, if I’m looking from a spiritual viewpoint, then I can say that having a child will completely smash you to pieces and you will have to rebuild yourself into a new person. It is the phoenix-rising-from-the-ashes. And so the new you will be SO much wiser, bigger-hearted, compassionate, tolerant, patient, etc. than the old you. So if you want a spiritual, character-building experience, then have a child.

It is a very similar process to a serious illness. People often say about Cancer: “It was the worst thing and the best thing that ever happened to me.” And I think it’s the same with children – at least in the early years when they are SO physically demanding. Then, as they get older, and you are now a new and improved person, then the benefits start rolling in.

But again, ONLY if you’ve given that child what they needed during the brutal years. I’ve seen many parents who did not sacrifice themse