No More Diverticulitis or Constipation – Listen To Your Colon 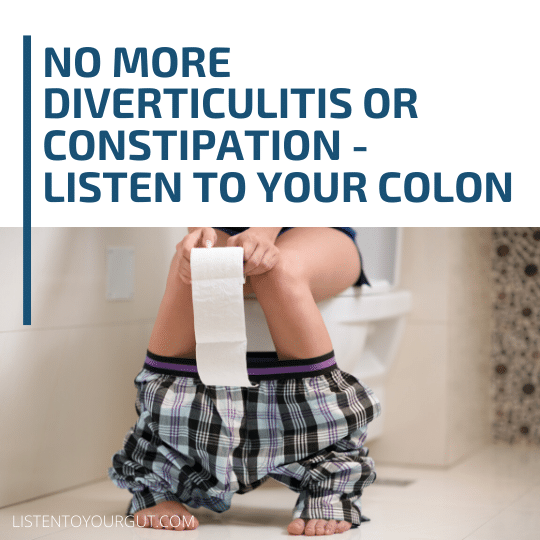 Back when I had Crohn’s Disease (a few decades ago) one of my most prevalent symptoms was diarrhea. I had loose, multiple bowel movements for years – it was one of my last symptoms to heal. So imagine my surprise when I turned 40 and experienced constipation for the first time ever. Which was further complicated by the fact that rectal surgery to remove skin tags at age 19 had left me with scar tissue in my rectum.

Well fast-forward a few years and I had developed the Rectal StrictureHeal protocol to soften/dissolve the scar tissue in my rectum and I had also resolved the (at times excruciating) constipation. And guess what? The reason most constipation advice doesn’t work is because doctors are trying to simplify something (eat more fiber, drink more water!) that is actually quite complex and multi-factorial.

So instead of just expanding the Constipation symptom section in Listen To Your Gut, I had to write a separate book including all the varied protocols, gentle safe cleanse/detox, and dietary variations.

Heads up if you’re a woman over age 40 suffering from constipation – get rid of wheat (every speck of it) and see what happens. That’s your first thing to test.

Also see my video series on Pooping Positions for Constipation. And check out this encouraging letter from a reader of Listen To Your Colon: The Complete Natural Healing Guide for Constipation to see what he found most valuable:

“I have tried most if not all of your suggestions and the results have been fantastic. Not sure if my Diverticulitis has resolved (without actually being able to see it’s hard to tell 🙂 ), but I rarely have cramps anymore and everything has been regular on the backside (if you know what I mean). Surprisingly, the biggest thing that seemed to help was the position techniques when using the toilet and the colonic massages. Just the simple propping of your knees and sitting straight up does wonders. I used to sit in a bent over position, primarily due to the simultaneous cramping, not realizing that this was ‘pinching’ the internal organs that needed to be straight to allow things to pass through. It was also important to establish a ‘set’ time every day to have a bowel movement (per your book), and for me that is in the morning. It’s running like clockwork (no pun intended).

Here are some of the other things that I’ve also tried based on your book Listen to your Colon and continue at this time that work for me: