Hope For Gluten-Intolerant and Coeliac Disease 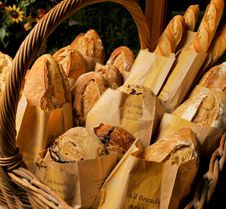 Here we have yet another example of our craze for cheap ‘n easy resulting in health issues that weren’t present when quality and nutrition were the higher priority.

Modern people seem to have lost the knowledge that wheat is a grain, and like all grains, needs to be soaked and fermented prior to cooking/ingestion. As the cookbook, Nourishing Traditions points out, when you prepare grains properly, many tolerance issues disappear.

There are artisan bakers who use these natural fermentation techniques in their bread if you don’t want to start baking bread yourself. I’m lucky to have a local bakery, Fieldstone Artisan Breads, just down the road, who uses this natural fermentation method and I can tell you, the bread is delicious! As they say on their website:

Naturally leavened breads are easier to digest due to their slow, extended, 24 hour fermentation with leaven. During the long fermentation required to produce a natural leaven or sourdough, the natural cultures “predigest” the grain, converting carbohydrates into simple sugars and breaking down proteins, making naturally leavened bread easier to assimilate in our digestive systems. This is similar to how beneficial bacteria will culture milk into yoghurt and cheese.

And now, here’s an excerpt of an article from the Shipton Mill in England, which illustrates that when wheat is fermented properly, even gluten-intolerant and coeliacs can eat bread!!:

The timing of the emergence of coeliac disease, which was first diagnosed in the 1950s, coincides with the post-war drive to industrialise food production including baking.

Widespread wheat intolerance, however, emerged less than 20 years ago. At almost the same time, people started talking about an invasive strain of yeast called Candida albicans, which caused joint pain and digestive discomfort.

Andrew Whitley recalls in his book that at this time people started ringing up asking for breads made without wheat or baker’s yeast. As luck would have it, he had developed a sourdough rye bread that contained no wheat and was raised using a spontaneous fermentation (lasting about 24 hours) of ‘wild’ yeasts present in the flour. Customers tried it and found that their digestive problems were eased.

This experience was echoed elsewhere, as more people sought bread that didn’t contain wheat, or industrial yeast, or both. The bread on offer in the shops seemed to be making them ill.

The most interesting recent research, with considerable implications for making our daily bread wholesome again, has shown that lactic acid bacteria are capable of de-activating the very substances that cause wheat allergy and coeliac disease.

In 2002 Italian scientists demonstrated, for the first time that, with selected sourdough, lactic acid bacteria could neutralise some of the wheat gliadin that attacks the intestinal mucosa of coeliacs.

In 2004 a Japanese study showed how the lactic fermentation of soy sauce completely removes any allergens from wheat, which is one of its two main ingredients. This is no mean feat, since other studies have proved that the particular parts of the wheat gliadin that harm humans are hardly affected at all by stomach enzymes, and very acidic gastric and duodenal fluids.

It seems to be the unique property of certain lactic acid bacteria that, given time, they can knock out some otherwise impervious elements that make wheat unpalatable for so many people. Modern processes do not allow this to happen, leaving the allergens in place.

A ray of hope

But what do these are test-tube studies mean for the bread we eat – or can’t eat?

Most remarkably, the Italians made a bread with 30 per cent wheat flour (plus oats, millet and buckwheat) and fermented the dough with selected sourdough lactobacilli. It took 24 hours to hydrolyse almost completely the wheat gliadins and the ‘33-mer peptide, the most potent induc