WHY Vaping is Bad for Your Lungs 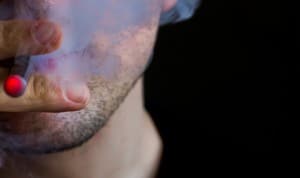 My teenagers asked me whether vaping with the nicotine-free vape is safe. If you have a teenager, then you know that vaping is the new ‘big thang’ and kids have even been allowed to vape at some schools. They can also buy it themselves at the local gas station or 7/11. So is it safe? Or is vaping harmful to your health?

The short answer is: the chemicals contained in nicotine-free Vape (a type of electronic cigarette) damage the lining and cells of your lungs, irritate the respiratory tract, make breathing more difficult, and may also result in congestion (increased mucus production as your lungs attempt to soothe and heal the damage).

So is vaping harmful? You bet! Is it as harmful as cigarette smoking? It’s too early to tell, from the limited research we have available.

The best use of vaping seems to be to help people quit smoking; so you can go from something very harmful, to hopefully something less harmful.

But if teens are thinking it’s a harmless, non-toxic way to look/feel cool – that’s simply not correct. And if you’re a teen who needs your lungs for sports, then you really should give vaping a miss.

It is not – contrary to what certain actresses have claimed – just exhaling water!

Unfortunately, we don’t have a lot of research or clinical studies available, but here’s a sampling:

“Samples contained carcinogens and other hazardous chemicals, including diethylene glycol, which is found in antifreeze. Last year, a report from Greek researchers found that using e-cigarettes increased breathing difficulty in both smokers and non-smokers, according to Medical News Today.”
– Source

“Interestingly, nicotine-free e-cig solutions were also found to include lung-harming substances, such as acrolein. This substance, which is present in both e-cig solution and vapor, has been shown to damage the lungs by attacking the molecules that hold endothelial cells together.”
– Source

“The FDA, after finding trace amounts of toxic and carcinogenic ingredients in several samples, sought to regulate e-cigarettes as drug-delivery devices. A federal judge ruled in 2010 that it lacked such authority, so the FDA is moving to regulate them as tobacco products…. the University of Athens in Greece found e-cigarettes caused breathing problems or “significant airway resistance” after 10 minutes of use in eight non-smokers and 11 smokers with normal lung function.”
– Source

Personally, I think nicotine-free vaping is a clever ploy to get kids ‘inducted’ into the idea and culture of smoking – which has seen such a rapid decline and loss of revenue.