“Mamma Mia” Movie Made Me Cry 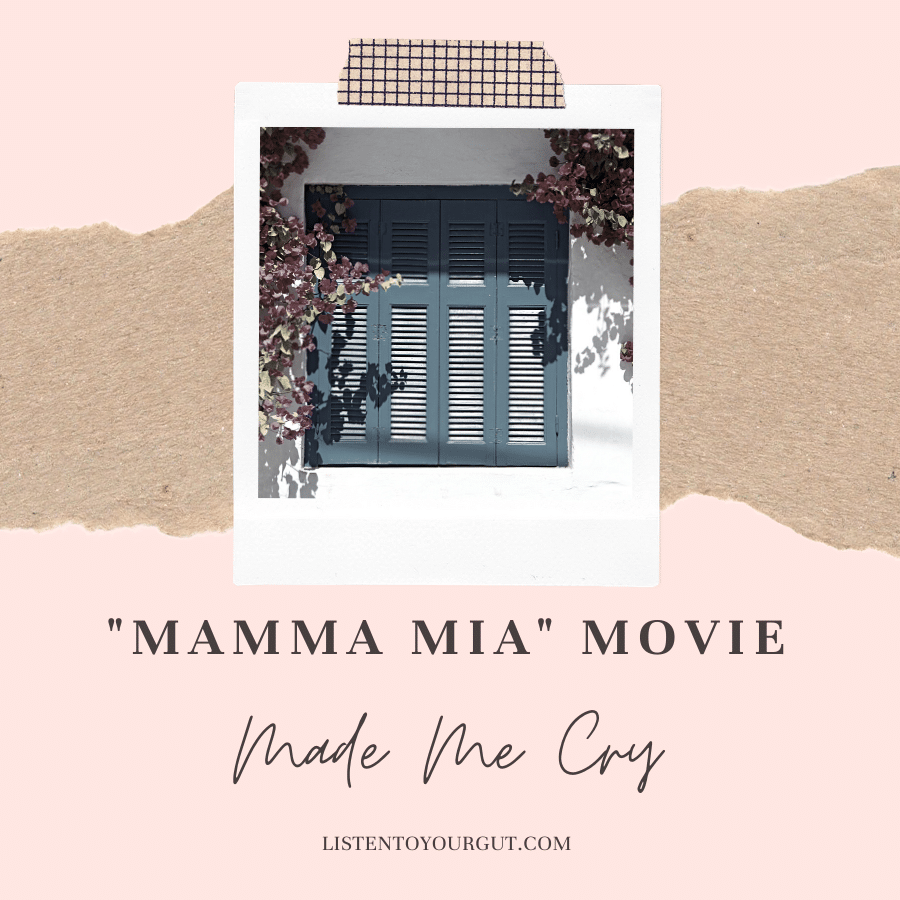 I went to see the movie “Mamma Mia” a few days ago. I’d heard a lot about how it was so good, and how some people had seen it 10 times, etc. I knew that it was set to the music of ABBA and it was supposed to be really fun.

I actually was feeling really down on the day I saw it – I went to the afternoon showing and hoped it would cheer me up. I was hoping it would transport me to another reality for a few hours, one that didn’t contain demanding children, drudgery, chores, and work, work, work.

Boy, did it ever. The movie was set in the beautiful Greek Islands with lots of singing, dancing, good friends and a don’t-give-up-on-your-dreams theme. And I cried the whole way through it.

It was so depressing for me! I went to the Greek islands with my good friend Linda B. in my twenties and had a blast. Before I had children, I traveled the world – often at a moment’s notice.

That’s even how I met my husband. He was in Hong Kong and I was in Vancouver, on Wednesday he said, “If I send you a ticket, will you come?” Sure! We’d met on the phone and had never even seen a photo of each other. I arrived in Hong Kong on Sunday and 3 days later we were engaged. Six months later we were married. That was 13 years ago and he’s still the love of my life.

Dreams? Oh yeah, I know a lot about dreams and have always followed mine.

Singing and dancing? – yep, used to do a shitload of that. Even worked as a singer/songwriter in London, UK, for 3 years. Used to dance the night away. Last time was 9 years ago.

Old and dear friendships? – yep, got some of those too. My friend Corey and I went to Tokyo after university to shoot the International Fashion Shows – we had formed a photography business together our last year of university and so were sponsored by the Edmonton Journal newspaper to go cover the shows. Our friend Linda O. came over 6 months later and the three of us had the time of our lives for the next 2 years. Then Corey and I went to London and Linda O. went home to Canada.

And where are all my good friends today? – I’m in Vancouver, Linda B. is in Edmonton, Corey is in London and Linda O. became an evangelical Christian who wants nothing to do with her former self/life. I don’t have a single friend I can just call up and say, “Let’s go for coffee” – and we do.

And so the movie “Mamma Mia” made me cry, the entire way through it. Because it kept reminding me of what I used to have, who I used to be and how much FUN that was.

And I compared it to my life now – which is just filled with SO much drudgery. What changed? I had children. Three of them. And while I – standard sentiment, but still so true – love them tremendously and wouldn’t give them up for anything, still, the majority of my life, on certain days, feels like a giant piece of shit.

It is so wearing having to serve other people all day long, every day. It is so draining to have to do the same things, the same routines, day after day. It is excruciating never having even 24 hours off. Not being able to rest when you are tired, not being able to eat when you are hungry. Because the childrens’ needs come first – because they are too young to do much of anything for themselves yet.

I thought it was just me.

Until I went to my daughter Zara’s first day of grade one and talked to another mother there about the movie. “Oh yes,” she said, “It made me cry too. When I came home I wanted to change everything about my life.”

Then a group of us talked about how none of us had any friends. And I don’t mean friends-acquaintances, I mean bosom-friends. Why? Because none of us were living where we grew up, or went to university.

“It’s so hard to make friends now,” said one of the moms, “it’s like trying to find a boyfriend, you have to go out, talk about everything, see if you’re compatible… who has the time? And it’s exhausting. Still, you have to try…”