Why Does Conventional Fruit Look Better Than Organic? 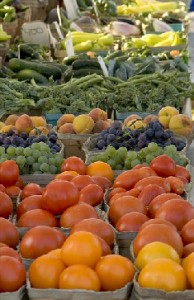 My organic grocery delivery company often gets this question: “Why doesn’t this organic apple or banana look ‘as good as’ a conventional one?” Here’s why, when it comes to conventional produce, looks can be deceiving…

Today’s consumers are raised on TV, airbrushed photos and carefully manipulated images designed to sell illusions of perfection. But when it comes to produce, looks aren’t everything. Chances are that shiny apple, or yellow banana are gassed, bathed in pesticides and fungicides or injected with food dyes that make them a toxic treat for the senses.

Let’s slip into bananas. We’ve recently seen quality issues with this family favorite. This is because February and March are traditionally tough months for banana growers. Soaring humidity makes their crop very vulnerable to rot. Organic growers typically treat this disease naturally, with aids such as grapefruit seed oil extract. It’s not a perfect system. But the blemished bananas contain far fewer chemical contaminants than their photogenic golden “conventional” counterparts.

“Conventional” bananas are picked before they ripen naturally. Calcium Carbide, ammonia or sulphur dioxide then ripens them at super-speed. In high concentration, these toxins may damage the nervous system, kidneys and liver. The bananas might also be soaked in the carcinogen benonomyl, and repeatedly sprayed with pesticides.

Tomatoes are also picked before maturity and shipped long distances. They’re gassed with the plant hormone ethylene to ripen them and may be injected with red dye for eye appeal. Because the “conventional” tomato was never truly ripe it’s now vitamin deficient…unless you count the nutrient value of its chemical fertilizers, pesticides, ripeners and dye.

I’ll never forget when my cousin came to visit and stayed in our studio apartment that we were using as an office. Two months after his departure, I opened the fridge and saw a bag of tomatoes he’d left behind. I was aghast to see that they still looked perfect – no mold, no softening, nothing! I’ve eaten nothing but organic produce for the last 15 years, so I was used to our normal tomatoes that last about a week before being taken over by hungry microbes. Here’s the thing: Bacteria and fungi are extremely smart organisms – they have adapted and thrived where thousands of species have gone extinct. So if they won’t touch the food – that should tell you something!

Also, the taste of a conventional tomato pales next to a vine-ripened, fresh organic tomato full of flavor. Tip: For the best flavor, store tomatoes at room temperature, rather than in the fridge. I’ve tested both ways, and mine don’t last any longer when stored in the fridge, but they do lose a lot of flavor.

What about “juicy” ‘conventional’ grocery store apples? They’re full of enough preservatives to change the slogan to “an apple a day keeps decomposition away.” Picked while still green, apples are sprayed with thiabendazole at the warehouse, a chemical known to cause birth defects. After sorting they’re treated with preservatives to keep them juicy and crisp, and then covered with shellac or carnuba wax (just to really seal in all those chemicals and make sure they don’t was