The Perfect Place To Live – Part 2

Following on from my last post about The Perfect Place To Live, here’s what else I’ve learned about myself during this exploration:

1. I’ve noticed that no matter where I am, when things get really difficult (kids, health, food – i.e. sourcing healthy food and cooking from scratch, exhaustion, etc.) my knee-jerk reaction is to get out of there and go to the other place. If I’m in White Rock, then I think, “Well if I was in Playa del Carmen, this wouldn’t be happening because x, y, z. So I need to get to Playa and everything will be okay.” And then vice versa. When I get frustrated, exhausted, or angry here in Playa, my automatic assumption is that changing the location (going home) will bring relief, solve the problem.

2. I’m here in the Caribbean Mayan Riviera and there are atill times when I’m cold.

So I had assumed that if we lived somewhere the weather was nice, the kids would be so much easier to take care of and my life would get a lot easier.

But now I’m realizing that one of the reasons they’re so happy outside in White Rock is that our yard is very well set up; trampoline, swingset, slide, monkey bars, garden for planting things, mini soccer field with nets, rope swing, and a next-door neighbour with kids similar ages who also have a trampoline – so they can jump in unison. Plus the kids can just climb over the fence and go back and forth between the houses. 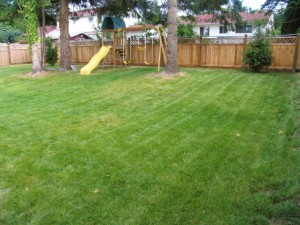 Our Big Backyard (trampoline is now in the back left corner) 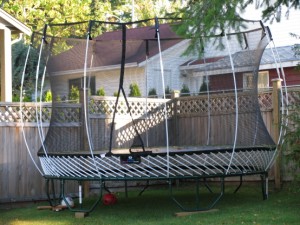 Here’s The Tramp – the safest one on the market, well worth the money

Here, all they can do is wander around the common area and swim in the pool. Granted, this is very fun and special. However, they can’t just swim for six hours a day. So they get bored. And yes, if we built our own house here on a double lot, we could reproduce what we’ve got at home – the construction of which would take about two years. 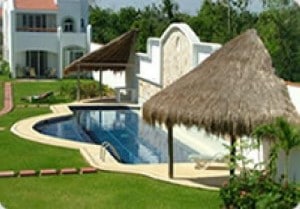 Here’s the bottom line: No matter where we are, the kids need a MIX of activities and pace to keep them from getting bored and fighting. For example, on any given day they need a mix of all the following activities: play inside, play outside (or even just a walk to the shops or through the forest), playdates with other kids, or a play-based activity, downtime (videos, books, Nintendo DS), helping with food prep (which they enjoy) and eating.

4. The kids are not healthier here, living in the sun, than in the rain and dark of White Rock. Again, I had assumed that if they got lots of exposure to sunlight every day, it would prevent them from getting sick. However, changes of weather here – from hot to cooler and windy – produce colds just as quickly as weather changes back home. In fact, due to the poor diet, swimming in chlorinated pools and not sleeping as well, the kids have actually been sicker here than they are back in White Rock. In one month we’ve had two of them with colds, three earaches (probably would have developed into full-blown infections if I didn’t have my miracle eardrops with me), and a fever with gastritis. Geez, now that I’ve written it all down – I realize this is about as much illness as we get in six to eight months back in White Rock!

5. Language fluency is more important with kids. Because you need to get everything set up FAST. And you need to get problems solved (i.e. no gas, hot water, etc.) immediately. Or else life is extremely difficult and NOT fun.

6. Two weeks after we arrived, the kids told me that home, their bedrooms/stuff, friends, soccer, school, gymnastics, etc. are more important to them than warm weather and being able to go outside. Again, yes, we could re-create all that here. But realistically (having moved countries several times), this would take about a year. Yesterday – four weeks after we first arrived – my eldest son, Oscar, said that it’s way more fun here because you can go outside all the time and there’s so much more to do here, so it’s better than all the stuff we have at home. Uurgh. So this morning I asked both Oscar and Zara, “Ok, where would you rather live full-time; here in Playa or in White Rock?” They both said White Rock, because it scored higher for them than Playa del Carmen.

At the end of it all, it’s becoming increasingly apparent to me that it’s impossible to try out living somewhere. Business gurus and success coaches always encourage you to eliminate the word “try” from your vocabulary – because it’s meaningless and just sets you up for failure by giving you an easy out. Either do it, or don’t do it.

When I think back over all the countries/cities I’ve lived in, I wouldn’t select any one of them to live in if I’d tried them first. We get back to my previous post about the deal-breakers. Every place has at least one big deal-breaker. It’s what you then do with it that determines your experience.

It’s like living together to see how it goes before you get married. That’s never made any sense to me, since the two states of being have very little in common. It’s like saying, I’ll try on this pair of pants to see if I like that sweater. Huh? Exactly. Trying things out, whether it’s marriage, or living in a place, have very little in common with actually getting married or moving there.

Because without the commitment, there is a completely different energy, attitude and thought process that accompanies the activity. Since thought creates reality, your thoughts/energy/attitude will seriously impact and determine the outcome of any given scenario.

So, having said all that, do I wish we had just bought a house and moved here, rather than renting this house for six weeks first? No. Because here’s the nebulous, wriggly thing that’s really mucking me about: I cannot identify the reason why, but Vancouver/White Rock is some kind of spiritual home for us. Whenever we go away, there is this annoying, persistent energetic/spiritual pull back to the place. For seven months of the year, for about ten years, we’ve done nothing but moan about living there (because of the weather). But whenever we leave it, we feel a longing to return and nothing feels ‘right’ about trying to live elsewhere.