Avoid Bacterial Soil Organisms – Especially if you have Auto-Immune Disease 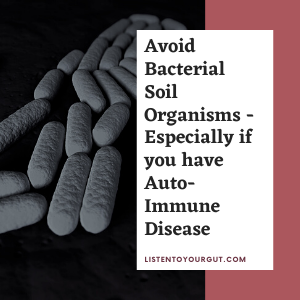 When I first wrote about the dangers of ingesting bacterial soil organisms (also known as HSO’s, SO’s, SBO’s, or shelf-stable probiotics) back in 2008, some claimed the information from Natasha Trenev was not valid (Natasha founded Natren, which is a probiotic manufacturer). So I copied my original article with the research references, and posted it here.

Long story short: by 2011 Garden of Life had changed their Primal Defense product so the only (direct) soil organism it contained was Bacillus subtilis – which has been used for over 1000 years by the Japanese to culture natto and does have a long history of safety in human usage. It did leave me wondering why, however, that Garden of Life changed the product? Especially after their CEO had contacted me personally in 2005 to try and convince me that soil organisms were safe…

When actions do not match words, you need to look deeper into what’s actually going on. Whatever their reasons, it was done very quietly – I only became aware of it in 2011 when one of my readers notified me. This is why you cannot rely on probiotic manufacturers to have your best interests at heart – and why I wrote this blog post on how to choose a potent probiotic.

I am bringing this up again because I recently came across this report/study of a 73-year-old male with chronic lymphocytic leukemia who had been previously taking Enterogermina brand probiotic (B. subtilis) as a means to manage his diarrhea. He was admitted to the hospital because of high fever, mental confusion, and persistent diarrhea. They ceased ingestion of Enterogermina upon his admittance. After further testing, a chest x-ray, and some blood cultures were performed, the man tested positive fo