35 Years with Crohn’s – Finally a Breakthrough! 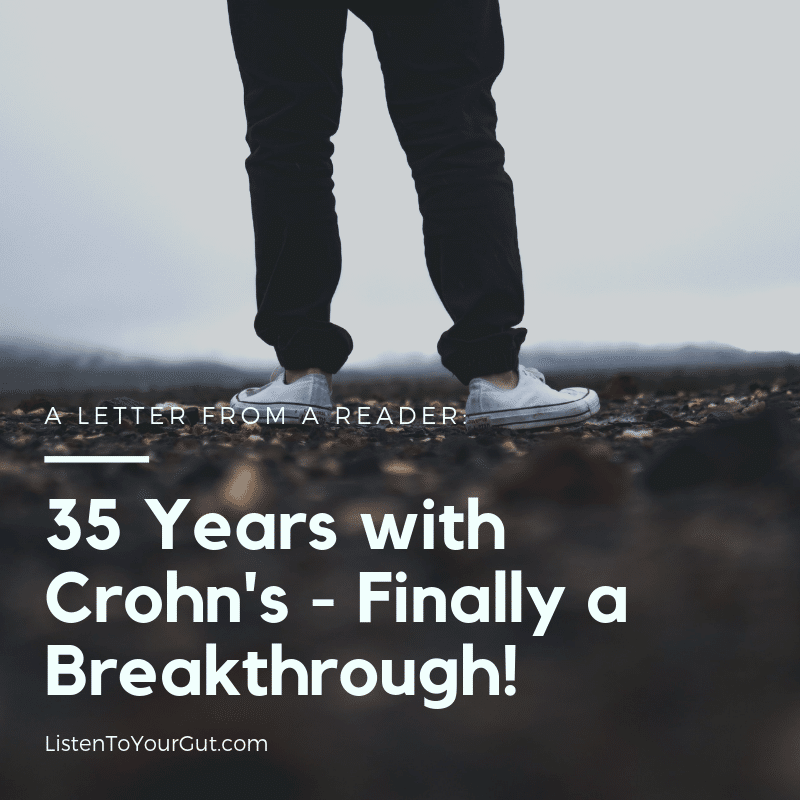 This letter from a reader is remarkable for several reasons:

1. Along with the physical healing protocols, he delved headfirst into emotional healing (which is crucial).

2. Tom was never able to take ANY supplements before using my protocols and addressing his emotional issues.

I love the amount of detail Tom’s wife has given us in her email, and I hope you find it encouraging and also helpful in your own healing journey.

Here is Tom’s story, told by his amazingly supportive wife:

“After 35 years of trying to manage Crohn’s Disease, we have never seen such an improvement in Tom’s health. From 2002 through 2016 he had been on the Specific Carbohydrate Diet (SCD), experiencing some relief along with flare ups and a few partial bowel obstructions. He weaned off Humira in December 2016. Strictures from an original bowel resection back in ’82 finally brought us to a crossroads in January 2017. We knew how seriously ill Tom was when he lost more than 25 lbs. He was becoming weak and lethargic. I read both books, Listen to Your Gut and The IBD Remission Diet, in order to learn everything I needed to know about Jini’s protocols. Some days I felt I was on overload as I cared for my sick husband while formulating the extensive supplement schedule for him to follow.

Tom began the IBD Remission Diet with a partial Elemental Diet for 4 weeks (the only food he ate was chopped chicken, fish, applesauce, and squash). During this time we slowly introduced all the recommended supplements. By week 4, Tom was ready to go full elemental, consuming 6 Absorb Plus shakes per day. He felt good. No cramps, gas, or bloating. His bowels were loose, but we understood that was part of being on a liquid diet.

All of Tom’s life he has been unable to take supplements, but now he was tolerating Calcium Ascorbate, Quercetin, Grapeseed Extract, Vit. E, Vit. D, Natren probiotics, Joy of the Mountains oil of oregano, George’s Aloe Vera Juice… and everything worked very well! We were excited and hopeful for the future. I referred back to both books on a daily basis, constantly refreshing my knowledge of what to look for and what to do if we hit a snag. And we did hit a few snags and had some setbacks. I ‘chatted’ online with Chris at ListenToYourGut.com, and even phoned in on more than one occasion. Always, I received encouragement and the assurance that we were not alone in this journey!

From Jini’s suggestion in the book, Tom began having Cranial Sacral Therapy and also NAET Allergy Testing. He also does nightly castor oil packs over his stricture area and I perform abdominal massage along with some reflexology. This definitely seems to be softening the stricture and helping things to pass.

Tom has also benefited from Hemmorheal – wow, that worked almost immediately and he was so grateful! But most important, he has been working through some deep emotional issues that he feels sure has contributed to the disease process all these years. That perhaps has been the hardest part of this recovery, but a necessary part all the same. All I can say is that much, much prayer has gone into everything we are doing, and the results speak for themselves.

I would say the only difficulty Tom is having right now is that he has not gained any weight back. Unfortunately he no longer seems able to tolerate Absorb Plus, which is puzzling because he was on one shake a day for the last two years, and then 4-6 shakes during the Elemental Diet phase. We are wondering if he built up an intolerance to whey, because even when I switched over to Vital Whey, he experienced bloating and pain. Gaining weight back is our biggest challenge. He feels good, but just can’t seem to gain weight. (We also tried Sun Warrior rice protein, but he reacted to that as well.)